Nhlanhla Nene, who was dismissed by former president Jacob Zuma in 2015, gives evidence at corruption inquiry 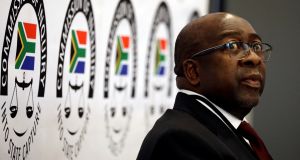 South Africa’s finance minister Nhlanhla Nene is the first minister to appear at the commission of inquiry into corruption in the public sector. Photograph: Reuters/Siphiwe Sibeko

South Africa’s finance minister has said he was fired from his cabinet post in 2015 by former president Jacob Zuma for refusing to sanction government projects that would have benefited the Gupta business family.

Giving evidence at a commission of inquiry into corruption in the public sector on Wednesday, Nhlanhla Nene described how his refusal to sign off on a multibillion euro nuclear deal with Russia and proposed South Africa Airways (SAA) strategies cost him his job.

Mr Nene, the first cabinet minister to appear before the commission, was dismissed by Mr Zuma in December 2015 during his first term as finance minister, a move that was seen to have undermined the economy.

He was replaced by little known African National Congress MP Des van Rooyen, who in turn was redeployed after four days following a public outcry over his appointment.

The Commission of Inquiry into State Capture, Corruption and Fraud in the Public Sector has been established to investigate allegations that businessmen Athol, Ajay and Rajesh Gupta and their associates illegally influenced political decisions to their financial benefit. They deny any wrongdoing.

Mr Nene told the inquiry: “I do believe I was removed from office because of my refusal to toe the line in relation to certain projects.” He then added that in hindsight, “it seems those projects may have benefited the Gupta family and other close associates of the then president”.

When asked by inquiry chairman, deputy chief justice Raymond Zondo, what these projects related to, he replied: “For instance, the nuclear deal and the SAA strategy”.

Mr Nene went on to describe how he tried to oppose South Africa’s proposed 1.3 trillion rand nuclear deal with Russia’s state-run energy company Rosatom to provide power stations because the “costs associated with it are astronomical”.

It has been widely reported in local media that the Guptas stood to benefit from this deal through their 2010 purchase of South Africa’s Shiva uranium mine from Uranium One, a Rosatom subsidiary, if it became a supplier of the metal to newly built nuclear power stations.

Mr Nene said he also clashed with Mr Zuma over his refusal to sign off on a new SSA route from South Africa to Khartoum, Sudan, that the president requested because it would have added 30 million rand in losses over two years to the already struggling airline.

In addition, Mr Nene said he came under fire for refusing to sign off on an SAA-Airbus deal proposed by airline chairwoman Dudu Myeni – a Zuma-ally – as it would have threatened the company’s financial stability.

Mr Nene went on to say that Mr Zuma informed him in December 2015 that he was being redeployed to the newly established Brics Bank, and gave no reason for his decision to stand him down as finance minister.

However, Mr Nene maintained it was “obvious the deployment was a fabrication. I say so because the president had no authority to offer me a position” at the bank. Brazil, Russia, India, China, and South Africa signed an agreement to form the Brics Bank in June 2014.

The finance minister also addressed rumours that he met with the Guptas in the past. While he confirmed he had done so on four occasions from 2009, when deputy finance minister, he insisted that at no time was he asked to do anything to benefit the men.

Most Americans disapprove of Trump’s response to protests, says poll 00:20
Thousands gather to remember George Floyd in Houston hometown 00:19
MPs will no longer be able to vote without being present at Westminster 21:55
Yemen funds for humanitarian aid fall far short of sum needed 20:00
Black and Asian people in England 50% more likely to die from Covid-19 – report 19:07