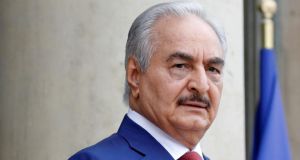 Libyan rebel general Khalifa Haftar has rejected a joint Russian and Turkish appeal for a ceasefire, advanced on the western city of Misrata, and announced he will continue his campaign to oust the United Nations-recognised government in Tripoli.

By dismissing the truce, Haftar has snubbed his ally, Russian president Vladimir Putin, and his main external antagonist, Turkish president Recep Tayyip Erdogan, who met in Istanbul on Wednesday. In Libya, as in Syria, Moscow and Ankara are on opposite sides.

Haftar welcomed “Putin’s initiative” but argued the political process could be revived only after the demobilisation of Muslim-fundamentalist militias he brands terrorists, which control the capital and protect the UN-backed Government of National Accord (GNA).

He is sharply critical of Turkey, which has reportedly sent to Tripoli 35 army officers to train militiamen, deployed 300 Turkish surrogate Syrian fighters and provided military equipment, ammunition and drones.

Haftar spoke from a position of strength. In a bid to pre-empt any large-scale landing of Turkish troops, his Libyan National Army took over the coastal city of Sirte, 500km east of the capital.

Until then, Sirte had been held by a GNA-allied militia which withdrew from the city without a fight. The home town of former Libyan leader Muammar Gadafy, Sirte is strategic because it is located on the east-west and north-south network of roads, allowing control of troop movements and supply convoys in the region. It is also close to Libya’s oil fields and export terminals.

The Putin-Erdogan summit coincided with meetings in Brussels between GNA prime minister Fayez al-Sarraj, German foreign minister Heiko Mass and EU officials. An expectation that Haftar and Sarraj might meet in Italy to discuss a truce have been dashed.

Since Gadafy’s fall in 2011, Libya has been divided between the GNA in the west and a rival regime based in Tobruk in the east. The latter is supported openly by Egypt, Saudi Arabia, the Emirates and, covertly, by Russia and France.

Erdogan’s growing involvement in the Libyan conflict has, so far, not complicated relations with Putin. They celebrated the inauguration of the 930km-long TurkStream pipeline designed to carry Russian natural gas to Turkey and southern Europe via Turkey. The pipeline is meant to bypass Ukraine and ensure European dependence on Russian gas exports.

The Istanbul gathering followed an Athens summit between the leaders of Cyprus, Greece and Israel, who signed an agreement for the construction of an EastMed pipeline which has the support of the US and financial backing of the EU.

Since this project competes with TurkStream, Erdogan seeks to scupper EastMed by asserting control of the resources of the eastern Mediterranean.

He joined with Sarraj to claim offshore economic zones which stretch from the Turkish to the Libyan coasts, bisect the eastern end of the sea, and enable the two countries to block the construction of the EastMed pipeline.