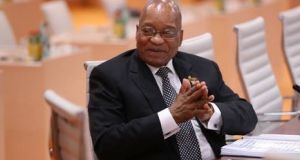 ANC president Jacob Zuma: he is due to step down as ANC leader at the end of this year. Photograph: Getty Images

The key provincial battle ground in the African National Congress’s forthcoming elections has witnessed dozens of murders since 2014 that rights activists believe are linked to the party’s internal power struggles.

The scale of the slaughter taking place in KwaZulu-Natal (KZN) has emerged in recent months at the Moerane Commission of Inquiry, which is investigating political killings in the coastal province.

In May police minister Fikile Mbalula confirmed at a press conference that police were investigating 33 cases of politically-motivated murders in KZN since January 2016, which sent shock waves through the South African public.

However, in mid-July rights activists and violence monitors addressing the inquiry maintained the bloodshed was far higher, and that many of the victims were municipal-level ANC officials and community leaders.

Human rights and social justice activist Vanessa Burger said in evidence that at least 89 murders suspected of being politically-motivated were linked to a single hostel complex, Glebelands, in Umlazi, KZN, and that just one person had been charged to date. Since she gave her evidence to the inquiry the death toll linked to the Glebelands complex has risen to 92.

KZN has a history of political violence that stretches back to the apartheid era. During South Africa’s transition to democracy in the 1990s, thousands of people died in politically-motivated violence in the region.

Much of that bloodshed was secretly directed and supported by elements of the apartheid-era state security forces seeking to destabilise the country in a bid to improve their hand in the negotiations that led to the new dispensation.

Now, with another major transition of power in the ruling party only months away, the revelations at the Moerane inquiry are once again raising the spectre of hidden hands orchestrating violence for their own narrow political ends.

ANC president Jacob Zuma, who comes from KZN, is due to step down as ANC leader at the end of this year, and campaigning to succeed him and his leadership team has become increasingly confrontational.

Addressing the inquiry on July 17th, Burger described the situation in KZN as one in which police officers, ANC officials, and hit men were committing or facilitating murder with impunity.

In her evidence she said that Zuma had been linked to what is happening there through a meeting he allegedly held with an ANC councillor involved with the Glebelands hostel.

Zuma draws much of his support in the ANC from his home province, and keeps a tight grip on how the party operates there to ensure the local party branches stay loyal to him.

In an email to The Irish Times, Burger said the murders she referred to in her evidence were nearly all carried out by hit men living at Glebelands, which is overseen by the ANC-run eThekwini Municipality.

She added that sources at the hostel informed her that many murders were of community leaders trying to have ineffective and corrupt ANC councillors replaced.

In addition, violence monitor Mary de Haas told the inquiry she believed many of the political killings in KZN are linked to factions and power struggles in the ANC.

Sibusiso Zikode, the leader of shack dwellers’ movement Abahlali BaseMjondolo told the inquiry that people had been shot by police on instructions from senior politicians, and that ANC leaders suppress activists fighting corruption.

Institute for Security Studies researcher Gareth Newham told The Irish Times that no concrete proof had been presented to the inquiry so far that links the murders to the ANC’s elective conference in December. But if such links were established, he added, that would constitute a new departure in the ruling party at a time when it is divided.

“I suspect that in many cases the people behind these murders are trying to protect their access to resources. Because if they lose that, they go straight back to poverty,” he said.

“But a key characteristic of Zuma’s rule is that his supporters have openly threatened individuals. If his preferred candidate looks like she might not win the presidential election it would not take much for political violence to erupt in KZN.”

A growing number of ANC MPs are speaking out against Zuma and his supporters in government for allegedly facilitating the looting of the state, and many of them have reported receiving death threats for publicly taking a stand.

While the identity of those ordering the murders in KZN remains unsubstantiated, what is clear is that political aspirants putting themselves forward for election in December need to secure significant support from the ANC’s KZN branches to be successful.

Of the county’s nine provinces, it is the region where the former liberation movement has established its largest number of branches. These structures elect the party’s new national leadership every five years.

Nationwide the ANC has around 4,000 branches. At the last elective conference in 2012, KZN had the most delegates at the event with 974. Its closest rival, the Eastern Cape, had 676 delegates.

Each branch dispatches a delegate to the conference to vote in line with its position on the candidates vying for election. If a candidate does well in KZN, they stand a good chance of getting elected.

The Moerane inquiry, which is led by advocate Marumo Moerane, is continuing.