Beijing’s interest is not simply about multibillion-dollar investment deals 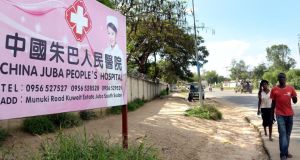 A sign for the China Juba People’s Hospital in Juba, South Sudan. China stepped up its engagement with the newly-independent country this year. Photograph: Brenda Fitzsimons 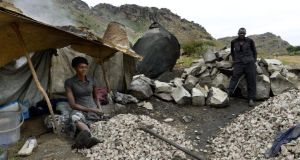 A women breaks rocks to stones for a living in Juba. South Sudan is one of the world’s most underdeveloped countries, with little existing infrastructure. Photograph: Brenda Fitzsimons

Among those anxiously watching this week’s violence in South Sudan is one of the world’s youngest nation’s newest friends: China. The clashes that began in the capital, Juba, at the weekend have already claimed hundreds of lives and show signs of spreading to other parts of the country. Some observers have raised the spectre of civil war in a nation already scarred by a previous one – with Khartoum before secession – that lasted decades and became Africa’s longest.

China stepped up its engagement with South Sudan this year, pledging $43 million (€31.5 million) to conduct a geological study to help the Juba government allocate mining licences in its efforts to map the country’s mineral resources.

Unexplored deposits
South Sudanese officials believe the oil-rich new nation also has unexplored deposits of gold, diamonds, copper, uranium, manganese and iron ore. Earlier this year, South Sudan introduced a mining law aimed at drawing foreign investment but it will take time to develop the sector because of the absence of almost any infrastructure or geological surveys.

“South Sudan will give Chinese companies the opportunity to invest in the Republic of South Sudan in the areas of petroleum and mining industries, and also in other economic circles,” the country’s oil and mining minister Stephen Dhieu Dau said as he announced the assistance from Beijing in September.

In March, a Chinese official denied that Beijing had promised $8 billion (€5.9 billion) in aid as Juba had claimed last year, but suggested more could be offered if the fragile nation achieved a lasting peace. The events of this week make that seem an even more remote possibility.

Like elsewhere in Africa, China’s engagement with South Sudan is not simply about multibillion-dollar investment deals. It also plays out in smaller ways on the streets of Juba and other towns where Chinese expats have opened “Chinese Friendship” clinics and schools, as well as hotels, restaurants, and other small businesses.

But key to the burgeoning relationship between Beijing and Juba is the one thing the world’s least-developed state has in abundance: oil. Before South Sudan declared independence in 2011, China had invested heavily in Sudan’s oil industry and had thrown its weight behind Khartoum, providing political and military support to the government of president of Omar al-Bashir.

Infrastructure
Most of the oil is now in South Sudan – where it the source of most of the two-year-old state’s revenues – but the predominantly Chinese-built infrastructure to harness it – including pipelines, refinery and export terminal – is in the North. In order to preserve and expand its clout in the oil sector, Beijing must perform a delicate balancing act in terms of the political sensitivities following partition, not only cultivating Juba but also keeping Khartoum on side.

“Relations were a little frosty [after independence] but they are now starting to improve,” says Jeremiah Mutonga, the African Development Bank (AfDB) representative in South Sudan.

The AfDB is involved in discussions with the World Bank and China’s Exim Bank regarding plans for a 960km transport corridor linking Juba with Kenya, a vital project for landlocked South Sudan which already imports almost all its food from neighbouring countries.

While China’s past support for Khartoum has not been forgotten, South Sudan officials – who like to declare the country “open for business” – say they are pragmatic when it comes to forging new bilateral ties with Beijing.

“Despite China’s historical links with Khartoum, they have decided they want a very close relationship with South Sudan,” foreign minister Barnaba Benjamin told me in Juba last month.

“We are focused on what we can get from the relationship. It can be win-win if we do it the right way.”

Many in Juba – several of whom have travelled to China as part of official delegations – now praise Beijing, saying it is responding swiftly to South Sudan’s needs when others have dragged their feet because of the challenges of working in a country lacking basic infrastructure.

As elsewhere in Africa, China’s “no strings attached” approach and economic co-operation model is appealing to many in South Sudan who are desperate for investment and impatient for development. “The Chinese are different,” says Benjamin. “They say they will build the roads now, whereas the West say they need to carry out feasibility tests for three years before they can even start on the project. We can’t wait, we want to move fast, we need this infrastructure as soon as possible.”

Riek Machar, the veteran rebel commander who was open about his presidential ambitions before the incumbent– another former rebel commander, Salva Kiir – accused him of attempting a coup amid the fighting this week, also welcomes Chinese interest in South Sudan.

Liberation
“During the liberation we were against them because we thought they were strengthening the war machinery of Khartoum, but after we signed the [2005] peace agreement and declared independence the investments of China became very useful,” Machar, who is now in hiding, told me in late November.

But there are some cautious voices too, who look at other corners of Africa where China’s engagement has not run so smoothly. “Given limited government capacity and an untested legislative framework, [South Sudan’s] economic planners must take care to harness such investment for its own benefit, lest Africa’s newest state be overrun in a resource scramble,” warned the Brussels-based International Crisis Group in a report last year. “We need to be careful,” says one official in Juba. “The Chinese are everywhere and we can’t be left out, but we must make sure we proceed with eyes wide open.”
Series concluded