Nelson Mandela ‘was breathing on his own, free of life support’ before he died

Grandson Mandla was there to share his last moments 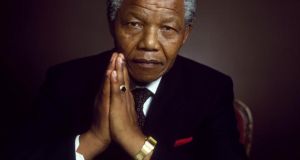 Surrounded by close friends and family members, Nelson Mandela was breathing on his own before he died, free of the life-support system that had kept him alive since last June, according to local reports.

The few people allowed to see Mr Mandela in the hours before he passed away were ushered into the room in twos and threes for short periods, so they could share a private farewell.

The Sunday Times quoted Bantu Holomisa, the leader of the United Democratic Movement and a longtime friend of Mr Mandela, as saying he received a call last Thursday to say the president’s condition had worsened.

“I went straight to see him in his room. I was sad to see that his situation, from the last time I saw him, had deteriorated very badly,” he said.

Mr Holomisa described how he had spent over an hour sitting with his friend and mentor, but then left the house about 7pm – 90 minutes before the statesman was declared dead. “Little did I know it would be the last time I would see him alive,” he said.

Although Mr Mandela’s daughters Zindzi and Zenani were in London attending the premier of the recently released biopic about their father, based on his book Long Walk to Freedom, his grandson and traditional heir, Mandla, was there to share his last moments. He had been summoned earlier that day from his Eastern Cape home to be at his bedside.

The anti-apartheid and first democratically elected president of South Africa had repeatedly been hospitalised with lung troubles in recent years, and last June he was placed on artificial ventilation following a turn for the worse.

According to the Sunday Times: “By the time he died on Thursday evening, he was not on a life-support machine and had been breathing on his own.”

Once South African president Jacob Zuma made the announcement to the world that Mr Mandela had passed away, many of his close African National Congress comrades gathered at the house.

Singing his praises
As Mr Mandela’s body left his home in Houghton, Johannesburg, to be taken to 1 Military Hospital in Pretoria, Mandla sang his grandfather’s praises with the words “Aah Dalibunga [one of his Xhosa names]”.

He was joined in song by those in attendance.

Mr Mandela’s body was taken away in a casket draped in the South African flag.

Last night Mr Mandela’s family released a statement in which they said they had entered into a covenant with the people of South Africa and the world to be true to the values of equality and justice for which he stood.

“As a family we have no option except to be bound by these values. Let the word go here from hence that we dare not fail! And we know, and know too well, that you the people of the world will not fail Madiba,” the statement said.