Analysis: Egypt has mutated from poster boy for free elections to a ballot-failed nation 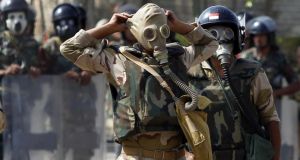 For those trying to persuade Libya’s radicals to embrace democracy, the overthrow of neighbouring Egypt’s first democratically elected – and Islamist – president at the hands of the military has been nothing short of disastrous.

The constellation of militias that sprang up during Libya’s 2011 revolution includes a number of hardliners that reject democracy as contrary to Islam. Chief among them is Ansar al-Sharia, the group accused of participating in an attack last year that killed the US ambassador to Libya. Its leader appeared on television in the run-up to Libya’s first post-Gadafy elections last July to denounce the ballot. Efforts since to convince such people of the benefits of democracy have included bringing politically engaged Islamists from Egypt to argue the case.

Destroyed argument
“The arguments we make in favour of democracy have just fallen apart in their eyes. They have seen Islamists take part in elections and win only to lose everything in a way that is completely against democracy,” said one mediator. “It will be far more difficult to get them to listen to us now.”

The Brotherhood, which renounced violence decades ago, has often been ridiculed by more militant groups, including al-Qaeda, for playing the democratic game. Such elements felt threatened by the democratic wave that washed over the Middle East after popular protests led to the fall of dictators in Egypt, Tunisia and Libya. “What is truly regrettable is the rallying of thousands of duped Muslim youth in voter queues before ballot boxes instead of lining them up to fight in the cause of Allah,” lamented al-Qaeda’s Egyptian leader Ayman al-Zawahiri.

These tentative experiments in democracy, imperfect as they have been in all three countries transitioning from decades of dictatorship, served to undermine those siren voices who had always argued that armed action is the most effective way of bringing about social and political change.

The fear now is that the manner of Morsi’s removal by the army after just one year in office could benefit extremist currents, some of which are already crowing “We told you so” in online forums.

In an impassioned Facebook posting shortly before he was detained by the army last week, Morsi’s foreign policy adviser Essam el-Haddad warned that the ousting of an elected Islamist government in Egypt would bolster radical forces.

“The message will resonate throughout the Muslim world loud and clear: democracy is not for Muslims,” he wrote. “I do not need to explain in detail the worldwide catastrophic ramifications of this message.”

Morsi’s fall will now join the list of crucial turning points in the Islamist memory. These include Algeria in 1991, when the army moved to prevent an Islamist electoral victory, prompting a bloody civil war, and the Palestinian elections in 2006 when Hamas swept the polls only to be ostracised by Europe and the US.

In a series of tweets, the Somali al-Qaeda affiliate al-Shabab gave a sense of how Morsi’s eviction is being perceived within a more hardline milieu. “[The Muslim Brotherhood] should perhaps learn a little from the lessons of history and those ‘democratically elected’ before them in Algeria or even Hamas. . . It’s now time for the MB to revise its policies, adjust its priorities and turn to the one and the only solution for change: jihad . . . It’s time to remove those rose-tinted spectacles and see the world as accurately as it is, change comes by the bullet alone; NOT the ballot.”

One post addressing al-Qaeda leader Ayman al-Zawahiri concluded: “Thank you . . . for you have warned us time and again to not enter the political game.”