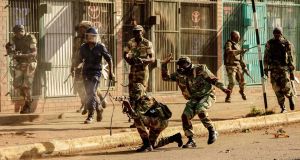 A soldier fires shots towards demonstrators in Harare, as protests erupted over alleged fraud in the country’s election. Photograph: Zinyange Auntony/AFP/Getty Images

Zimbabwe’s general election descended into bloodshed on Wednesday when police used live ammunition on opposition party supporters protesting in the streets of the capital against the alleged rigging of the poll.

The country’s state-run broadcaster, the ZBC, said that three people had been confirmed killed and dozens injured in the violent clashes between the security forces and protesters, who had marched on the Zimbabwe Electoral Commission headquarters after it released election results showing the ruling Zanu-PF party had won a majority in parliament.

While the running battles initially involved the police and protesters, the military – including tanks – was soon called in to quell a situation that appeared to be getting out of control. Journalists were also beaten by security forces for covering the unfolding events.

Although the streets of Harare were quiet by Wednesday evening, there are concerns that the violence will erupt again on Thursday if Emmerson Mnangagwa – the country’s interim president – is announced as the winner of the presidential race.

The protests involving thousands of supporters of the Movement for Democratic Change (MDC) Alliance started at about midday after the electoral commission announced that Zanu-PF, formerly the party of Robert Mugabe, which has been in power since the southern African country gained independence in 1980, won 145 of the 210 seats in parliament. The MDC was credited with 60 seats, with the results of three constituencies outstanding.

THANK YOU ZIMBABWE ...I’m humbled by the support you have given to me as a Presidential Candidate. We have won the popular vote. You voted for total Change in this past election!We have won this one together. No amount of results manipulation will alter your WILL #Godisinit

At this crucial time, I call on everyone to desist from provocative declarations and statements. We must all demonstrate patience and maturity, and act in a way that puts our people and their safety first. Now is the time for responsibility and above all, peace

The MDC Alliance believes the electoral commission has intentionally delayed the release of the presidential results to enable it rig the poll in favour of Zanu-PF’s candidate, Mr Mnangagwa. His main opponent for the presidency, MDC leader Nelson Chamisa, declared on Twitter on Wednesday morning that he had won the popular vote.

“The results are a gimmick to try and prepare Zimbabwe for a rigged election,” said Nkululeko Sibanda, an MDC Alliance spokesman.

Zimbabweans went to the polls on Monday in the first general election since Mr Mugabe was ousted from power in November in a military takeover.

Mr Mnangagwa called for calm and patience after Wednesday’s protests erupted. A tweet from the presidency said: “Now is the time for responsibility and above all, peace”.

Earlier in the day election observers from the European Union criticised the poll, saying there was an “un-level playing field” and “intimidation of voters”.

“These elections were seen as a critical test of Zimbabwe’s reform process,” the EU mission’s chief observer Elmar Brok said.

He added: “In some senses, up to this point, the conduct of the polls has had a number of positive features, but in other senses serious concerns remain . . . Now we hope for a transparent results process.”