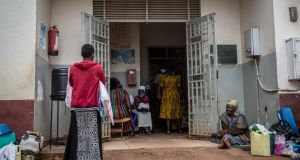 A mother stands with her baby outside the maternity ward in Gulu Regional Referral Hospital, northern Uganda, on July 30th. Photograph: Sally Hayden

Across Africa, healthcare workers and activists are calling for more help for pregnant women, as concerns rise about maternal mortality rates increasing during the Covid-19 pandemic.

Last Monday, at Zimbabwe’s Harare Central Hospital, seven babies were stillborn after maternity wards became overwhelmed during a coronavirus-related nurses’ strike. Dr Peter Magombeyi, a Zimbabwean doctor, tweeted that only one baby born through Caesarean that day survived. The BBC later confirmed this with two other doctors.

On Thursday, Betty Aol Ochan, the leader of Uganda’s opposition in parliament, visited the maternity ward in Gulu Regional Referral Hospital, in the country’s north.

Outside, dozens of women were crowded together, sitting on the ground or throughout the hallways. Ms Ochan said there was a lack of equipment, a shortage of medication, and that buildings were falling apart as upgrades were halted when the pandemic began.

She said women now have to pay to get an anaesthetic that is safe for their baby, which many can’t afford. “Some of our women may die because they don’t have that medicine available,” she said. “For us in the north, our women are so poor. They cannot buy this medicine.”

By early April, at least seven women and two babies were reported to have died in Uganda because a transport ban meant they couldn’t access emergency medical care.

Medical staff and aid workers expect the pandemic to lead to a rise in pregnancies in many African countries, particularly among girls and young women. An increase in teenage pregnancies was documented during the Ebola outbreak in West Africa, which took place between 2014 and 2016.

“[When] Covid-19 came in place, our young people, because of redundancy and also sometimes frustration, a lot of them have gotten involved in this business,” said Ms Ochan, suggesting that some women and girls are turning to prostitution in this time and getting pregnant. “So what I can say is that we need to prepare for them.”

Despite coronavirus being initially slow to spread across Africa, the continent is now approaching one million confirmed cases, 10 weeks after hitting 100,000. Experts in many countries are warning that already overburdened and under-resourced health services will be unable to cope.

“Covid-19 worsened all health systems,” Nazarius Mbona Tumwesigye, an epidemiology professor at Makerere University in Kampala, told The Irish Times. He said there would also be not as much government money to spend on health going forward. “Much less taxes are collected and less foreign exchange.”

In Kenya, reports that pregnant women were suffering serious problems because they couldn’t get to hospital during the nightly curfew led to Nairobi gynaecologist Jemimah Kariuki setting up a free taxi and ambulance service called Wheels for Life. Pregnant women can phone a toll-free number to be connected.

Prior to the pandemic, more than 800 women were dying each day from preventable causes related to childbirth and pregnancy, 99 per cent of whom were in developing countries, according to the World Health Organisation.