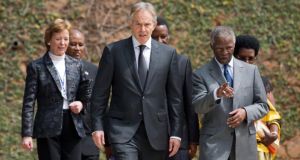 Former president Mary Robinson has said the UN did not “cover itself in glory” during the genocide in Rwanda 20 years ago and expressed sadness about the diplomatic dispute this week between that country and France.

As president of Ireland, Mary Robinson was one of the first heads of state to visit Rwanda after the genocide against the Tutsis. She arrived in September 1994. “It was a harrowing visit. I’ll never forget the scenes that I saw, and the smell of blood. Children’s shoes abandoned in churches.”

This week she was in Rwanda again, playing a prominent role in the 20th anniversary commemorations.

On Monday morning she joined other current and former heads of states at a memorial in the Kigali Memorial Centre, where she said it felt “really right to lay a wreath on behalf of the people of Ireland”.

This, she said, is because of the huge engagement of Irish people with Rwanda. “Trócaire, Concern, Goal were here 20 years ago, and Irish people poured money into this poor, French-speaking African country which we didn’t know until the terrible slaughter and genocide.”

In particular she says Trócaire has done fantastic work, being the first NGO to recognise the psychological impact that the genocide would have, and is still having on Rwandans. “Somehow Trócaire knew the trauma would be there.”

Political impacts of the genocide can still be felt in the country too. The diplomatic tensions between Rwanda and France resulted in France’s justice minister shunning the events, and the Rwandan government banning the French ambassador from attending. About this, Robinson said “It’s sad that there is that dispute. I would have hoped that after 20 years differences would have been well accommodated.”

She said that there hasn’t been a lot of willingness on the part of the French to realise that there’s “a need to move on in an appropriate way”, something that the United Nations has managed to do.

“The UN did not cover themselves with glory 20 years ago. Kofi Annan, as secretary general, acknowledged that in his capacity as head of peacekeeping at the time he had not done enough.”

Though Rwanda has certainly taken impressive strides, Rwandan president Paul Kagame has faced a huge amount of international criticism for the perceived lack of democracy in Rwanda, and the continued suppression of both political opposition and the media. Robinson agrees that this is an issue. “There is a very tight control which is something that has emerged from the sheer need to address the huge, humiliating event of such a proportion of the population being killed and the structures of the country being completely over-run.”

However, she hopes that 20 years on the leadership can begin to relax its grip. “My wish now for Rwanda is that they can recognise that it’s important for them to open up more political space, more space for criticism, more space for divergence of views.”

Through visiting Rwanda in her roles first as president, then UN high commissioner, and finally as special envoy, she says “I think I have more of an understanding, which means that as a friend I will be trying to encourage Rwanda on that path.”