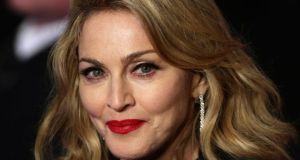 Malawi President Joyce Banda's government accused the "Material Girl" of bullying officials after she complained about her latest trip to the southern African country this month. Photograph: Yui Mok/PA Wire

The Malawi government has branded pop star Madonna an "uncouth" bully who exaggerates her charitable work in the country and demands preferential treatment when she visits.

Malawi President Joyce Banda's government accused the "Material Girl" of bullying officials after she complained about her latest trip to the southern African country this month.

"Among the many things that Madonna needs to learn as a matter of urgency is the decency of telling the truth," said an 11-point statement from Malawi's State House.

Media reports said Madonna and her children were forced to join a check-in queue and go through security with ordinary passengers at a Malawi airport when they left the country.

The "Holiday" singer dismissed Malawi's comments as "lies" in a statement on the website of her Raising Malawi foundation.

"I'm saddened that Malawi's President Joyce Banda has chosen to release lies about what we've accomplished, my intentions, how I personally conducted myself while visiting Malawi and other untruths," Madonna said.

Malawi said Madonna expected the government to be forever chained in an "obligation of gratitude" towards her for adopting two Malawian children and contributing to the construction of classrooms in the country.

"Kindness, as far as its ordinary meaning is concerned, is free and anonymous. If it can't be free and silent, it is not kindness; it is something else," the statement said. "Blackmail is the closest it becomes."

The singer said she came to Malawi seven years ago with honourable intentions and returned earlier this month to view the new schools built by her foundation.

"I did not ever ask or demand special treatment at the airport or elsewhere during my visit," Madonna said.

"I will not be distracted or discouraged by other people's political agendas. I made a promise to the children of Malawi and I am keeping that promise."

She said the disagreement was rooted in her history with President Banda's sister, Anjimile Mtila Oponyo, who once headed Raising Malawi. Ms Oponyo was fired and sued the charity for wrongful termination.

The Malawi government said in its statement the current dispute had nothing to do with Ms Oponyo, however.

"For her to accuse Mrs Oponyo for indiscretions that have clearly arisen from her personal frustrations that her ego has not been massaged by the state is uncouth, and speaks volumes of a musician who desperately thinks she must generate recognition by bullying state officials instead of playing decent music on the stage."