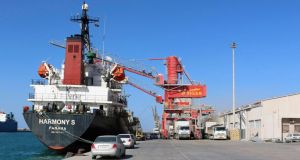 A power struggle between two rival governments that threatens to tear Libya apart has started to take its toll on Misrata, an important shipping and industrial hub that had shrugged off the turmoil until now. Photograph: Hani Amara/Reuters

A power struggle between two rival governments that threatens to tear Libya apart has started to take its toll on Misrata, an important shipping and industrial hub that had shrugged off the turmoil until now.

Production at the country’s biggest steel works has been cut and the port of Misrata has been forced to restrict operations.

Armed factions allied to the competing governments - one has set up shop in Tripoli after forcing the internationally recognised administration to flee to the east - are fighting for control of the oil producing nation four years after the civil war that ousted Muammar Gadafy.

Oil production has collapsed to a fifth of what Libya used to pump before the Nato-backed uprising, while wheat imports and other activity at seaports have been disrupted by clashes in the east of the country.

Misrata had so far not been affected by the unrest, since its port serves much of the country and it became a major air gateway to Libya when fighting forced Tripoli’s main airport to close in the summer.

The country’s third largest city is also home to the biggest free trade zone and the largest dairy products company, making it the only place with significant non-oil industrial activity in a country that relies on petroleum for most of its revenues.

But Misrata is also a power base of Libya Dawn - the faction that seized Tripoli in the summer by expelling armed rivals in a month-long battle. After Libya Dawn set up its own rival government, Misrata became part of the front line.

War planes allied to the recognised government, holed up in the east since losing the capital, have bombed Misrata’s steel plant, the port and the airport. Little was hit, but the campaign has scared away shippers as well as Turkish Airlines, the last foreign carrier to serve Libya.

Forces from Misrata once formed a major rebel brigade battling alongside fighters from Zintan to topple Gadafy. But since then Libya has descended into factional fighting as regions and cities turn against one another.

In Misrata, the Libyan Iron and Steel Company, one of Africa’s largest steel firms, is facing gas shortages and will have to cut production this year by shutting down two of its three direct iron reduction plants, its chairman said.

“We agreed with the electricity firm, as instructed by the government, to reduce production to 33 per cent due to gas supply problems to save natural gas and power,” chairman Mohamed Abdelmalik al-Faqih said.

Output of direct reduced iron, a key steel-making ingredient, would be just 550,000 tonnes in 2015, a further decrease from last year when it had planned to produce 1.6 million tonnes, but achieved only about 60 percent of the target due to power shortages.

The cutbacks would affect steelmaking operations and two of the company’s six furnaces would shut down.

Libya’s gas production has fallen since a group allied to Libya Dawn launched an offensive to take control of the Es Sider oil terminal in the east. Forces from the eastern government still hold the facility but it became damaged and had to close. The Tripoli government says it was also forced to lower gas output at the Mellitah plant in the west due to the risk of air strikes.

Though security in Misrata is still better than in Benghazi or Tripoli, Turkish and Austrian steel contractors have pulled out staff due to the air strikes, Mr Faqih said.

He said ships importing raw materials or fuel were increasingly reluctant to dock at Misrata, though marketing manager Ali Darrat said one ship had just arrived.

Some foreign shippers have diverted cargo to smaller Libyan ports such as Khoms, west of Misrata, after a warplane hit a quayside warehouse, an industry source said.

The United Nations is holding talks in Geneva with some of the warring factions, but the Tripoli-based government has stayed away.