Libya’s intertwined crises of migrants and civil war rage on

Analysis: There was a dreadful inevitability to the bombing of the Tajoura migrant detention centre that killed more than 55 this week 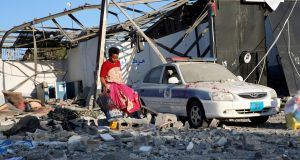 A woman at the detention centre for mainly African migrants that was hit by an air strike in the Tajoura suburb of the Libyan capital of Tripoli. Photograph: Reuters/Ismail Zitouny

Libya has not, for some time, been a place of safety. Yet for the EU, unwilling to welcome those fleeing Africa, there has been only one option for dealing with refugees: to see them returned to Libya’s shores and to the detention camps, places of death, torture and hunger.

There was a dreadful inevitability to the bombing of the Tajoura detention centre that killed more than 55 this week, which focused world attention again on the intertwined Libyan crises of migrants and civil war.

In recent months, since warlord Khalifa Haftar and his National Liberation Forces launched their assault on the UN-backed government of Fayez al-Sarraj in Tripoli, alarm bells over the safety of migrants has grown louder. About 3,000 are housed in locations close to the fighting where migrants have already been killed.

This week’s bombing has been denounced by the African Union-European Union-United Nations task force, through which Brussels directs EU intervention.

It has called for an independent international inquiry – not because anyone doubts Haftar’s responsibility, or that it constitutes a war crime, but because it represents the only way that political pressure can begin to be applied on the countries for which Haftar is essentially a proxy. They alone can choke off the arms he uses, and cut off the oxygen of spurious legitimacy in the international arena.

Although it has played a part in the efforts to save and repatriate migrants – so far 45,000 have been helped to return to their home countries – the EU has been largely confined to a role as external support for the UN special representative Ghassan Salamé, who is trying to kickstart a peace process.

The UN recently reapproved the EU military mission Sofia, in which Ireland played an important part, to combat migrant trafficking and arms smuggling off the coast. But the maritime aspect was suspended earlier this year, with the mission now continuing surveillance only by air, and also building the capabilities of the Libyan coastguard to stem the flow of migrants.

The EU claims it is trying to infuse that training with a heavy emphasis on human rights – critics fear this is a sham.

Salamé has been supportive of the internationally recognised Government of National Accord (GNA) in Tripoli under prime minister Fayez al-Sarraj, which itself is the product of a previous tentative peace deal.

But the war which now rages, escalated by the onslaught on Tripoli by Haftar, is no longer simply a Libyan war. Like those in Yemen and Syria, local militias act as proxies for the agendas of regional and global powers, in a battle involving those who contested the democratic Arab Spring and rival factions of political Islam. With Russia and the US sticking their oars in for good measure.

Since 2011, Abu Dhabi (UAE) has positioned itself at the forefront of a regional battle against the Arab uprisings and political Islamist groups – particularly the Muslim Brotherhood, which it sought to curtail by supporting Abdel Fatah al-Sisi’s takeover of Egypt. It has rationalised its arming of Haftar, contrary to a UN embargo, by suggesting the campaign is part of a struggle to liberate Tripoli from criminal militias and terrorists

Egypt, no less enthusiastically, as part of its campaign internally and externally against the Muslim Brotherhood, has strongly backed Haftar. Crucially Sisi directly lobbied US president Donald Trump who, despite US notional support for the UN process, shocked the UN Security Council by backing Haftar and publicly recognising his “significant role” in fighting terrorism,

The Saudis have intervened through support for the religious Makhdalist movement, which now plays a dominant role in Haftar’s security services, despite his avowed secularism.

Russia, which probably courted Haftar to strengthen its relationship with Egypt, has provided advisers, training and weapon maintenance, and provided international diplomatic cover.

And then, complicating the EU’s peace-brokering role, there is France, which has been backing the general overtly.

Turkey and Qatar have thrown their lot in with Tripoli and the GNA, a solidarity linked to the prominent role there of the Libyan branch of the Muslim Brotherhood. Turkey sees Libya as important to its attempt to boost its regional influence by cultivating the political Islamist groups that emerged across the region during the Arab uprisings. Qatar is contributing cash.

If Turkey and Qatar step up their support, the fear is that Haftar’s backers will do likewise, escalating the conflict. And US ambiguity is posing particular problem for EU over how the UN embargo on oil sales to Haftar can realistically be sustained.

“The battle for Trump’s attention taking place, as both sides in the war hire lobbyists to make their case in Washington, indicates how events may unfold,” writes Tarek Megerisi of the European Council on Foreign Relations. “Given his transactional doctrine and his endless search for foreign policy victories, Europe could be left with little space to protect its interests.”

A prerequisite for constructive European peacemaking will also be a degree of unity between the 28 member states. The challenge for EU diplomats will be to persuade France that it needs to change its position. Paris, Megerisi argues, should acknowledge that Haftar is not the strongman it believed him to be, as he is unable to assert control of the country militarily and counter terrorist threats to Europe and French interests in the Sahel. In fact, he says, there is a risk that Haftar will exacerbate these threats.

“Europe should try to convince Cairo, Riyadh, and Abu Dhabi that Haftar cannot win, and that they will incur reputational damage if they back his futile effort... Europe could succeed in this by coupling a pragmatic argument with credible threats – such as those to enforce sanctions on state and non-state actors that are involved in arms smuggling in Libya or that directly participate in the conflict,” he argues.

Initial steps will have to focus on securing a much-needed ceasefire and avoiding wider regional escalation.