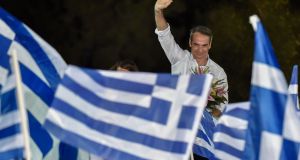 Greece’s opposition party New Democracy leader Kyriakos Mitsotakis: describes himself as a progressive and says he will place untested technocrats in prominent positions once in government. Photograph: Louisa Gouliamaki/AFP

As the sun sets over the Acropolis, bathing the monument in the gentle light of a dying day, Kyriakos Mitsotakis ascends the podium, punching the air in jubilant mood. The backdrop may be antiquity’s most famous site but before him is a sea of blue and white, the colour of the Greek flag being waved by the crowd.

Three days before snap elections, the opposition leader is on a roll. Democracy can produce unexpected results but every analyst agrees this is an election of foregone conclusion.

All polls point to victory for Mitsotakis’s centre-right New Democracy, with most suggesting the party is on course to win an outright majority in what would be a first for a country governed by fragile coalitions for the past decade.

On Thursday, a Pulse survey showed the conservatives leading the leftist Syriza by eight percentage points. If so, New Democracy would acquire between 155 and 159 seats in the 300-seat parliament, repeating its spectacular performance in the European election in May which prompted the prime minister, Alexis Tsipras, to call the vote three months ahead of schedule.

Mitsotakis, the son of a former premier who has been forced to face down accusations of privilege and nepotism, has new-found confidence.

With the wind behind him, the cosmopolitan former banker has waged a tireless campaign, rolling up the sleeves of his crisp white shirts and criss-crossing the country to listen to the problems of ordinary Greeks. In a nation long on the frontline of Europe’s financial crisis, he has focused primarily on economic rejuvenation, promising to lower taxes, lure foreign investment and create jobs.

“Standing here on this hallowed ground I am reminded of the ancients,” he told the crowd on Thursday night. “Power is not the goal; it is just a tool to make the lives of citizens better.”

Mitsotakis has been credited with rehabilitating one of Europe’s more traditional conservative parties, one that not that long ago was associated with the cronyism and corrupt policies blamed for the debt-stricken country’s financial woes.

“What we are seeing is a personal victory for a liberal reformist leader. In many ways New Democracy is a discredited party held responsible for the problems that led Greece to requiring bailout programmes,” said the political analyst Aris Hatzis. “He has become a far better speaker, much more relaxed, much more confident.”

After 4½ years of populist leftist rule under Tsipras, markets have also rejoiced at the prospect of a pro-business government being returned to power. Athens’s borrowing costs have hit record lows since the May 26th European vote.

But dangers lurk. At Thursday’s rally – his first and last in Athens – Mitsotakis rammed home his most pressing message: the need for Greeks to get out and vote. While the 51-year-old has pursued a more consensual approach, promising to represent “all Greeks as prime minister whether they support us or not”, the spectre of a low turnout hangs over the summer poll.

The election is the first since the collapse of military rule in 1974 to be held in July, a month when Greeks are either on holiday or weekending at the beach. With Greece in the grip of a heatwave, worries abound that many will give the ballot a miss.

Mitsotakis’s ability to gain a working majority will also depend on how smaller parties fare. On the right, New Democracy faces competition from the neo-fascist Golden Dawn and the ultra-national Greek Solution, a new political formation that has channelled anger over the controversial name-change accord Tsipras sealed with North Macedonia last year.

“Smaller parties including Yanis Varoufakis’s MeRA25 accounted for 20 per cent of the vote in the Euro election,” said the prominent pollster Ilias Nicolacopoulos. “New Democracy will pick up most of that but ultimately much will boil down to turnout.”

Syriza cadres have expressed mounting fears that Varoufakis, a former finance minister under Tsipras, will also pose a threat to a party that stormed to power in 2015 vowing to end the excoriating austerity demanded by bailout creditors. A maverick, who has since fallen out spectacularly with the 45-year-old Syriza leader, Varoufakis holds particular appeal among younger Greeks. “He has the cool factor,” said Nicolacopoulos of the telegenic showman.

Athens received almost €300 billion in rescue funds, the biggest bailout in global financial history between 2010 to 2015, as it battled bankruptcy and sought to remain in the euro zone.

Almost a year after exiting its third and final economic adjustment programme, anger over continuing austerity lingers, even if the crisis appears to have subsided and Greeks are less prone to take to the streets in protest.

If Mitsotakis wins big, analysts say it will be his chance to remould New Democracy in his own image. In private, the politician describes himself as a progressive and has signalled he will place untested technocrats in prominent positions once in government.

“The scope of his victory will allow him to take the bold measures he seems ready to take,” said Hatzis. “If he wins an outright majority he will enjoy a period of political hegemony. It will be his chance to avoid becoming just another link in a series of short-term prime ministers we have seen in the bailout age.” – Guardian