UK authorities break up slavery ring with more than 400 victims 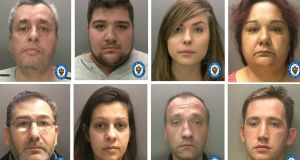 Members of the largest-ever UK modern slavery ring which forced more than 400 people into work have been jailed.

A three-year police investigation uncovered a well-organised criminal gang led by the Brzezinski family – which preyed on the homeless, former prisoners and alcoholics, from Poland.

The ring lured and then trafficked vulnerable victims to the UK with the promise of good money, but instead housed them in squalor, and used them as what a judge described as “commodities”.

Victims were paid as little as 50p for a day’s labour and in one case a worker was given coffee and a chicken as payment for redecorating a house.

Another man had to wash in a canal because he had no other access to water, while one house’s leaky toilet had to be plugged with an old duvet, such was the standard of disrepair.

One victim, describing “horrible” living conditions, said: “I would say some homeless people here in the UK live better than I lived after I arrived over here.”

Victims were reduced to recycling used cigarette butts off the street, and going to soup kitchens and food banks to get enough to eat.

Meanwhile, the gang bought lavish clothes and drove luxury cars, including a Bentley.

After the end of two trials, it can now be reported how five men and three women, all originally from Poland, exploited their destitute victims for pure “greed”.

They have all now been convicted of modern slavery offences and seven of their number, of money laundering.

Jurors heard the accounts of more than 90 victims, but it is believed at least 350 more had been through the gang’s hands, who had since either returned to their homeland, could not be traced, or were too scared to come forward.

A third, Jan Sadowski (26) of Dartmouth Street, West Bromwich, admitted his part on the first day of trial.

Sentencing the 52-year-old to 11 years on Friday, the judge described the “high functioning alcoholic” as having “direct control”, and “living in the nerve centre of the organisation”.

She said: “As the head of the family, he set the tone of the operation, and also enjoyed the fruits of the conspiracy, riding round in his Bentley and a fleet of high performance cars at his disposal.

“His life of leisure was also financed from complainants.”

The court heard that having been given bail after breaking his leg falling down the stairs during the trial, he had gone on the run since conviction, having “abused the compassion of the court”, the judge added.

Jailing Nowakowski for 6½ years, Judge Mary Stacey described him a one-time victim of the conspiracy who had risen to become a “spy and enforcer” for the gang.

She said: “He was fully embedded and his role was to keep the conspirators in line.

“Described as a top dog and perhaps a sergeant major, he enjoyed the power over the others.”

The judge jailed father-of-two Sadowski – the only defendant to plead guilty – for three years for his “lesser role”.

However, she said he had been integral to setting up trafficked victims’ bank accounts, for the benefit of the gang’s bosses.

At a previous trial ending in February, leading conspirator Marek Chowanic, along with Ignacy’s cousin, Marek Brzezinski, recruitment consultant Julianna Chodakiewicz, Natalia Zmuda and Justyna Parczewska, the group’s matriarch, were all convicted of their roles.

At their sentencing, Ms Stacey said their “degradation” of fellow human beings had been “totally unacceptable”, jailing the five for between 11 and 4½ years.

She said the defendants had subjected victims to a “demi-life of misery and poverty”, robbing them of their dignity and humanity “without care or regard for the rights of the individuals affected”.

She added: “Any lingering complacency after the 2007 bi-centenary celebrations of the abolition of the English Slave Trade Act was misplaced.

“The hard truth is that the practice continues, here in the UK, often hiding in plain sight.”

Together the group helped in the targeting and trafficking of people from their Polish homeland, placing them in cramped, rat-infested accommodation in the Black Country and putting them to work on farms, rubbish recycling centres and poultry factories.

In some cases, the gang waited outside the front gates of jails in Poland, to approach criminals who had just been released.

Victims, aged 17 to over 60, were housed across at least nine different addresses in West Bromwich, Walsall, Sandwell and Smethwick, crammed up to four to a room, fed out-of-date food, and forced to scavenge for mattresses to sleep on.

Some had no working toilets, heating or furniture.

If any complained, gang enforcers would humiliate, threaten or beat them up, while “house spies” – previously trafficked individuals turned trusted informers – kept an eye on the workers.

On several occasions, anti-slavery investigators with charity Hope for Justice, and West Midlands Police, uncovered shocking brutality against those who stepped out of line.

One man who complained about living conditions and pay had his arm broken, was refused medical care, and then ejected from the accommodation because his injury left him unable to work.

Another was stripped naked in front of other workers, doused in surgical chemical iodine, and told that the gang would remove his kidneys if he did not keep quiet.

The ring also infiltrated a recruitment agency, meaning work could be directly sourced, without raising suspicions with third parties.

Ms Stacey said the conspiracy, which ran from June 2012 until October 2017, was the “most ambitious, extensive and prolific” modern day slavery network ever uncovered.

Investigators believe it is the largest such criminal prosecution of its type in Europe, to date.

The gang operation was smashed after victims were uncovered by anti-slavery charity Hope for Justice.

The charity said 51 of the victims eventually made contact through its outreach efforts at two drop-in centres.

The organisation was then able to flag the slavery ring’s existence to police.

West Midlands Police then launched an investigation in February 2015.

The judge praised police but also the charity’s “absolutely remarkable” work, adding: “One wonders how long this would have gone undetected and flourished, otherwise.” – PA