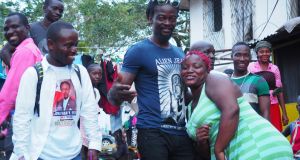 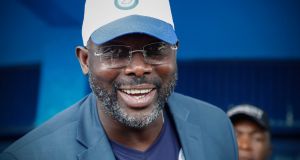 On Redemption Beach, a small crowd has gathered, agitating for a glimpse of a man they call the “King of Hipco”.

Takun J, pioneer of a musical genre meshing hip-hop with Liberian vernacular, is Liberia’s most popular musician. Long known for his pull-no-punches lyrics criticising the nation’s politicians, he is now on the stump.

Next Tuesday, the country will vote in an election widely seen as a test of its hard-won, still fragile peace. Takun J – his real name is Jonathan V Koffa – is running for district representative on the ticket of presidential hopeful Alexander B Cummings, a former Coca-Cola executive and one of the only candidates with a clean political slate.

The country’s 14-year civil war came to an end in 2003. But, even today, the ballot is riddled with the legacy of conflict. Among the presidential candidates is Prince Johnson, a former warlord, and Benoni Urey, the richest man in Liberia – both have ties to former president Charles Taylor, jailed in the UK for war crimes committed in neighbouring Sierra Leone (as yet, Taylor has not been held to account for crimes in his own country).

Frontrunner George Weah, one of the greatest footballers of his generation, who spent the war in Europe, scoring goals for the likes of AC Milan and Chelsea, has selected Taylor’s former wife as running mate, a move thought likely to secure the nostalgia vote from her ex-husband’s supporters. Even exiting president Ellen Johnson Sirleaf, otherwise a beacon for democracy in the region, had backed Taylor in the late-1980s rebellion that plunged the nation into war.

With the election largely dominated by Sirleaf’s well-entrenched Unity Party and Weah’s Coalition for Democratic Change, it seems unlikely that Cummings will make it through to the second round (scheduled for November 7th). But his squeaky-clean managerial profile and his enlisting of the King of Hipco have got people talking about what might be possible in a new Liberia.

“Maybe it’s too early for Cummings, but one day Liberia will be ready for him,” says one passenger in a collective taxi, eyeing a test ballot paper just distributed through the window.

Back at Redemption Beach, Takun J strides across the road into a muddy compound festooned with washing lines. He sets out his stall. “I’m going door-to-door, talking to people individually to carry the message,” he says, listing education, infrastructure and security as his priorities.

Dennis, an avid fan, says her favourite song is They Lie to Us, recorded around the time of the 2014-15 Ebola crisis. “Everyone thought I would write a song about Ebola,” says Takun J. “But I went back to [Sirleaf’s] inaugural day and what she said she’d do, and saw that nothing came.”

Water and electricity comes up again and again on the tour of Redemption Beach. “Everyone could have had electricity by now,” says Robert Taylor (53), a government worker. “Those who are emerging as the next leaders need to look after the next generations. No more depletion, abuse and misuse.”

Taylor reckons that only 10 per cent of the population are permanently connected to the grid. However, a diplomatic source accustomed to overseeing aid projects later cites the paltry figure of 3-4 per cent.

In the First Stop bar, young people clamour for selfies with Takun J. The bar is painted in red, white and blue, the colours of the country’s “Lone Star” flag, a variation on the American “Stars and Stripes”. Nearly two centuries after freed American slaves first colonised the country, ties with the US are still strong, with many Liberians playing the diversity visa lottery in the hopes of a better life across the Atlantic.

But it was rivalry between the Americo-Liberian elite and the indigenous “country people” that poisoned the nation’s politics. Redemption Beach is the site where, in 1980, former president Samuel Doe executed 13 leading officials from the government of assassinated Americo-Liberian president William Tolbert. In 1990, Doe himself would be brutally murdered by Prince Johnson, a former Charles Taylor ally, now standing for president in the upcoming elections.

“It’s one Liberia now,” says Takun J next day, at his home in Monrovia’s Carey Street. He reckons that three-quarters of Liberians no longer think their origins are of any importance. It’s time, he says, for the nation sometimes called America’s orphaned African grandchild to find its own way.

“After the war, you have to know... what your culture is. You have to know who you are. Liberians have to be ourselves, we have to identify ourselves. Before the war, Liberia was making music and movies. But with the war, they fucked up everything. With good leadership, we’re going to take Liberia to another dimension.

“Next election, I could run for president.”