Inside Somaliland: the tiny African state battling for survival

Twenty-five years since independence, the former British protectorate is beating the odds 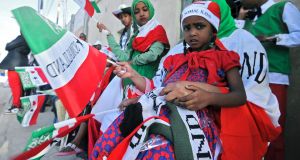 Flags are waved as soldiers of Somalia’s breakaway territory Somaliland march past during an independence day parade in the capital Hargeisa on Wednesday. Photograph: AFP Photo/Mohamed Abdiwahab

Somaliland remains a strand of British colonial history very few know about, and a place whose tangled legacy even fewer in power consider due to political expediencies.

Hence this internationally unrecognised but de facto sovereign nation continues to go it alone, as it has done since proclaiming independence from Somalia 25 years ago on Wednesday, following a civil war that killed about 50,000 in the region.

A British protectorate from 1886 until 1960 and unifying with what was then Italian Somaliland to create modern Somalia, today’s Somaliland exhibits many of the trappings of a functioning state: its own currency, a functioning bureaucracy, trained police and military, law and order on the streets.

Furthermore, since 2003 Somaliland has held a series of democratic elections resulting in orderly transfers of power.

Somaliland’s resolve is most clearly demonstrated in the capital, Hargeisa, formerly war-torn rubble in 1991 at the end of the civil war, its population living in refugee camps in neighbouring Ethiopia.

An event that lives on in infamy saw the jets of military dictator Mohammed Siad Barre’s regime take off from the airport and circle back to bomb the city.

“We are doing all the right things that the West preaches about but we continue to get nothing for it,” says Osman Abdillahi Sahardeed, minister at the ministry of information, culture and national guidance.

“This is a resilient country that depends on each other – we’re not after a handout but a hand-up.”

Its economy is perilously fragile. Non-statehood deprives it of direct large-scale international support and access to the likes of the World Bank and International Monetary Fund (IMF).

As a result, the government has a tiny budget and relies on the support of local clan elders – it is hard for any government to prove its legitimacy when essential services need the help of international humanitarian organisations, local NGOs and the private sector.

Somaliland survives on money sent by its diaspora– estimated to range from €400 million to at least double that annually – and by selling prodigious quantities of livestock to Arab countries.

All the while, poverty remains widespread, and swathes of men on streets sipping sweet Somali tea and chewing the stimulating plant khat throughout the day testify to chronic unemployment rates, a particular concern in a volatile part of the world.

“Young men are a ready-made pool of rudderless youth from which militant extremists with an agenda can recruit,” says Rakiya Omaar, a lawyer and chair of Horizon Institute, a Somaliland consultancy firm helping communities transition from underdevelopment to stability.

“If you look at the happiness of Somalilanders and the challenges they are facing, it does not match,” says Khadar Husein, operational director of the Hargeisa office of Transparency Solutions, a UK-based consultancy focused on civil society capacity building in Somaliland and Somalia.

“They are happy because of their values and religion.”

But others speak of risks of encroaching Wahhabism, a far more fundamental version of Islam compared to Somaliland’s conservative though relatively moderate religiousness, and almost everyone acknowledges the country’s present means of sustainment – heavily reliant on the private sector and diaspora – must diversity.

Somaliland needs greater income to develop and survive. For many, the key to Somaliland’s much-needed economic renaissance lies in tapping into the far stronger economy next door: Ethiopia, Africa’s second most populous country and its fastest-growing economy, according to the IMF.

Once an ancient nexus of maritime trade, Berbera has long been eclipsed by Djibouti’s ports to the north.

But Berbera port is now on the brink of a major expansion that could transform and return it to a regional transportation hub, and also help fund Somaliland’s nation-building dreams.

Landlocked Ethiopia has long been looking to diversify its access to the sea, an issue of immense strategic anxiety.

Currently 90 per cent of its trade goes through Djibouti, a tiny country with an expanding network of ports that scoops at least €1 billion in port fees from Ethiopia every year.

Somaliland would like about 30 per cent of that trade through Berbera , and Ethiopia is more than happy with that, allocating such a proportion in its latest growth and transformation plan that sets economic policy until 2020.

Ethiopia and Somaliland had already signed a memorandum of understanding covering trade, security, health and education in 2014 before, on March 31st, 2016, signing a trade agreement on using Berbera Port. And Ethiopia could just be the start.

“It would be a gateway to Africa, not just Ethiopia,” says Sharmarke Jama, a trade and economic adviser for the Somaliland government involved in negotiations on the port.

“The multiplying benefits for Somaliland’s economy could be endless.”

But much investment is needed at the port – currently handling less than 5 per cent of Ethiopia’s trade – before any more ships can arrive.

And the smart asphalt road Ethiopia built to the shared border instantly becomes less suited to heavy traffic on the Somaliland side.

Refurbishing the 268km route will cost about €265 million – more than the Somaliland government’s current annual budget – while the port expansion could be at least another €177 million.

So for now, Somaliland relies on a few western countries such as Britain providing advice and indirect financial aid through the likes of the Somaliland Development Fund, while negotiating with companies willing to take a chance on the port’s expansion.

Somaliland officials hope that increased trade at the port would enable greater self-sufficiency to develop the country, while also chipping away at the international community’s resistance over recognition.

“As our economic interests align with the region and we become more economically integrated, that can only help with recognition,” Sharmarke says.

But greater self-sufficiency would undoubtedly result from a resurgent Berbera, and without this infrastructure Somaliland’s economic potential will remain untapped, trapping its people in endless cycles of dependence, leaving idle youth on street corners.

On April 13th up to 500 migrants died after a boat capsized crossing the Mediterranean, of whom a large portion were Somalilanders and Somalis.

“Why are they leaving? Unemployment,” says Abdillahi Duhe, former foreign minister of Somaliland and now a consultant in the Ethiopian capital, Addis Ababa.

“Now is a very important time: we’ve passed the stage of recovery, we have peace – but many hindrances remain.”