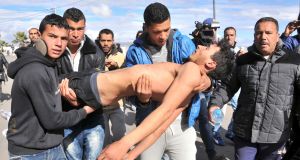 A young Tunisian who tried to commit suicide is carried to get medical help in Kasserine: If Tunisia was hailed as the success story of the Arab Spring , it has also become an example of the dangers in failing to tackle the frustrations of its youth. Photograph: Mohamed Khalil/AFP/Getty Images

On Deember 17th, 2010, a young, desperate Tunisian vendor named Mohamed Bouazizi set himself ablaze in a suicide protest over unemployment and police abuse that spread revolt across the Arab world.

Five years on, Ridha Yahyaoui, another young Tunisian, has killed himself in frustration after being refused a job, inflaming protests through the same impoverished towns that brought down the regime of Zine El-Abidine Ben Ali.

If Tunisia was hailed as the success story of the Arab Spring revolts for its democratic progress, it has also become an example of the dangers in failing to tackle economic malaise, alienation and frustrations of North African youth.

In Kasserine, the impoverished central city where this week’s protests began, more disaffected young men have threatened to kill themselves. Two were injured after trying to throw themselves off the roof of the local government building in fits of anger over the lack of jobs.

The unrest has quickly spread to other towns in the north and south of the country and shows no signs of weakening – protesters have stormed police stations and local government offices and killed one policeman. Tunis has been mostly calm, but sporadic rioting hit two poor districts on Thursday night.

On Friday, the government declared a nationwide curfew from 8pm to 5am to cope with the unrest. At least 19 people were arrested in the capital overnight, a security official said.

Chanting “Work, Freedom, Dignity”, protesters have been quick to evoke the 2011 “Jasmine Revolution” and echo demands over its promises of political freedom and the economic opportunities they say have failed to materialise.

“I thought the revolution would give us hope to find work with dignity,” said Haamza Hizi (28) an unemployed man in Kasserine. “I never thought I would repeat the same demands as five years ago. The old regime has robbed our dreams.”

Tunisia managed mostly to escape the kind of violent after-shocks seen in other Arab Spring countries that toppled long-standing leaders in Egypt, Yemen and Libya, which are still struggling to find stability.

Its young democracy brought a new constitution, a political compromise between secular and Islamist parties and free elections praised as a model for transition in a region where the gun has often beats out the ballot box.

But political progress has not been matched by economic advances. Unemployment stood at 15.3 per cent in 2015, up from 12 per cent in 2010, due to weak growth and lower investment.

University graduates comprise one-third of jobless Tunisians after student numbers increased. Mohamed Bouazizi was a graduate who had to sell fruit and vegetables to survive.

Those conditions are part of why even middle-class, educated Tunisians sometimes fall prey to Islamist militant recruiters seeking jihadist fighters for their ranks in Syria, Iraq and now Libya. More than 3,000 Tunisians are believed to be fighting in Islamist militant groups in Iraq and Syria.

“Ridha killed himself because he lost hope,” said Yahyaoui’s father Hathmane, clutching a photograph of his son. “I have lost my son, but I warn the authorities, my son will be the new Bouazizi and his death with create more protests for work and dignity.”

Sidi Bouzaid and Kasserine were the first cities to rise up against Ben Ali in the 2011 revolt. Unemployment in the olive and fruit farming region bordering Algeria is almost double the national average.

It has always been a sensitive area. Two years ago, an attempt by the government to trim subsidies by rising vehicle taxes triggered rioting in Kasserine and one man was killed.

Since the revolution, the region has also been affected by violence linked to Tunisia’s low-intensity conflict with Islamist militants, who use the border region with Algeria as a base for their operations, mostly against the army.

President Essebsi on Wednesday announced the government would seek to employ more than 6,000 youth in Kasserine and start construction and development projects. On Thursday, thousands came out to register at the governor’s office.

“We understand well the demands of protesters and they are legitimate,” government spokesman Khaled Chouket said. “But there may be attempts to infiltrate the protests to darken the name of Tunisia and undermine our democracy.”

Unlike its oil-wealthy neighbours Libya and Algeria, Tunisia has few natural resources and the years of instability have crimped investment.

Three major attacks last year by Islamist militants – against a museum in Tunis, tourists in a Sousse beach resort and a suicide bombing in the capital – have especially hit the tourist industry, a key source of jobs and revenue.

Across the border, Libya is imploding as two rival factions battle for control after the fall of Muammar Gaddafi, creating a haven for Islamist militants and another source of instability.

Essebsi’s ruling Nidaa Tounes party is also caught in a crisis of its own making. Nidaa has split over a fight about the role of Essebsi’s son in the party and one faction is threatening to break away.

“There is real anger and tension against the symbols of the state,” Essam Chebbi, of the opposition Republican Party, told Reuters. “That means people don’t have confidence in the government and it has lost credibility.”

Prime Minister Habib Essid has returned early from the World Economic Forum summit in Davos, convening an emergency cabinet meeting and saying he would address protests on Saturday. But there is little patience in the streets for just promises.

“The government says it has no magic wand,” said unemployed Arabic language graduate Mohamed Klhifi in Kasserine. “But our response is, we don’t want magic, we want our right to a job.”