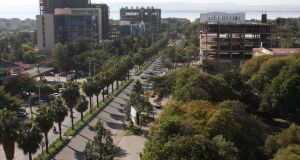 Hawassa, with its lake in the distance, and half-finished buildings whose construction has been halted due to economic turndown. Photograph: James Jeffrey

While Brits prepare for Brexit, in the Ethiopian lakeside city of Hawassa its residents have been grappling with similar concerns, plus a few additional, more acute ones.

Its picturesque location belies how Hawassa is at the heart of the belligerent maelstrom of regional nationalism sweeping Ethiopia, potentially posing a threat to the country’s future.

Hawassa is (or was) the capital of Sidama zone, an administrative district whose roughly 4-million-strong Sidama population represent the country’s fifth-largest ethnic group, from a smorgasbord of about 80 ethnicities in this multi-layered country of some 105 million people.

After bloody protests last July, Sidama zone was granted a referendum in November on whether to break from the Southern Nations, Nationalities and Peoples’ Region (SNNPR) – home to more than 40 other ethnic groups – to become federal Ethiopia’s 10th region.

Unlike Brexit, the 98.5 per cent vote to break left little ambiguity. But, similar to Brexit, the devil is in the detail, and what now happens to cosmopolitan Hawassa – which also serves as capital of SNNPR, and whose population is majority non-Sidama – is less clear.

“Most people don’t want independence, they want to stay with SNNPR,” I am told by 49-year-old bar manager Haile, a member of the Gurage ethnic group. “Many businesses have already moved their investments to other cities due to the fear and uncertainty.”

Hawassa and Sidama zone remain under a de facto state of emergency imposed by the authorities following the July trouble.

Red-bereted soldiers patrol the city, and at night its once vibrant streets empty by about 9pm. Hotels and lakeside lodges are largely empty of the weekend tourists who used to head down from Addis Ababa.

Admittedly, during my visit the scariest thing I see is the giant Marabou storks blocking a lakeside walkway. “Fabulously grisly,” as one birdlife guide describes them. I have to weave among their upright bodies – they stand as tall as a gaggle of young teenagers – with locals feeding the birds for a few German tourists taking pictures.

Hawassa residents, however, remember the grisly deaths of non-Sidama people by stoning and burning during the July violence that also spread to other towns in the Sidama zone and left about 60 dead.

“The killing style was beyond imagining,” one man tells me.

As long as the soldiers remain present, residents say further violence isn’t likely (the referendum itself passed off peacefully).

But non-Sidama still fear they could be marginalised and that discrimination will force them to leave, especially if Hawassa becomes the new regional capital and if the Sidamic language, which many can’t speak, becomes the city’s official language.

The Sidama conundrum is a microcosm of the nationwide dilemma for Ethiopia as it seeks to maintain its integrity as a nation state founded on ethnic federalism.

Long-suppressed ethnic tensions have surfaced since liberalising reforms in early 2018 by prime minister Abiy Ahmed, who in October won the Nobel Peace Prize.

As relations between communities and regions sour, observers increasingly talk of the parallels with 1990s Yugoslavia, where a federal state organised along similar lines failed to cohere, with awful consequences.

Regional turmoil has already led to huge numbers of Ethiopians displaced. National elections due this year could further exacerbate a combustible situation. Lately, mobs have attacked churches, burning some to the ground with priests inside – this in one of the world’s most religious countries.

A constant refrain among Hawassa residents and Ethiopians elsewhere is that political agitators – both homegrown and from the Ethiopian diaspora, returning after Abiy lifted bans on opposition groups – are generating and manipulating instability for their own ends.

“Around the city the agitation has been spurred by the intellectual elites,” a Hawassa University lecturer tells me. “Their main motivation is to get political power so they can get economic power. It’s happening across the whole country now.”

As my bus leaves the city, heading north to the airport, the lake’s surface has the same sparkling sheen as when I arrived. The same teenage boy who took my bus ticket fare on the way into Hawassa beams at me as small traditional tukel homes with their distinctive conical thatched roofs begin to appear in fields of golden wheat.

It all appears and feels part of another world – the same beguiling Ethiopia I fell for nearly 20 years ago – utterly unconnected to reports of dark political machinations and violence. Unfortunately, they all do inhabit the same beautiful, flawed and fragile space.