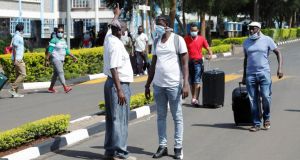 A security man gives orders to quarantined travellers protesting about being held because of the Covid-19 outbreak for more than the usual 14 days at Kenyatta University near Nairobi in Kenya. Photograph: Baz Ratner/Reuters

East African government quarantine facilities have come under scrutiny after people were filmed escaping one in Kenyan capital Nairobi this week, with some saying they couldn’t afford the cost of staying there.

As many as 50 of the 200 people held inside are thought to have escaped the Kenya Medical Training College’s coronavirus quarantine facility. Two escapees were later discovered in an illegal bar.

In Kenya – which has 336 confirmed cases of coronavirus and recorded 14 deaths – people who returned from particular countries were put in quarantine for at least 14 days before the borders closed last month.

Others were detained for violating coronavirus-related restrictions in the capital. One Kenyan journalist told The Irish Times he had heard of Nairobi residents being caught after curfew and given the choice to either pay a bribe or be sent to a government facility. Those put in quarantine are expected to pay between $20 and $100 each night to stay there.

Reports coming from quarantine centres show people locked up there are concerned about the conditions. “Even the cleaners who clean the toilets once a day complain how messy the toilets [are]. It’s because there is no water, so people are touching the same taps when you want to wash your hands, if there is even water . . . it’s just a mess.”

Neighbouring Uganda, which has confirmed 74 cases of the virus and no deaths, has a similar government-mandated system. Some people quarantined after arriving from abroad declared a hunger strike earlier this month. It began after they were told they had to stay an extra two weeks because one quarantined person tested positive, despite everyone being held in separate rooms.

Some accused the government of treating them “like criminals”. Jimmy Spire Ssentongo, a cartoonist who returned to Uganda from an academic retreat from the UK on March 18th, was locked up for more than three weeks. He said he was finally released on April 10th, after three negative tests for Covid-19. He called his stay “psychological torture”.

“The ills we’ve tolerated all along . . . make the entire fight against Covid-19 extremely difficult and they aggravate the danger,” he said. “It is not based on science, it is not based on logic. It is based on a pure gamble.”

In a hospital in Soroti, in eastern Uganda, two pregnant women suspected of having COVIDovid-19 carried out awent on hunger strike while demanding mosquito nets to protect them from contracting malaria, while one man quarantined in hospital in Gulu, in northern Uganda, escaped after complaining he hadn’t been given food in three days. He later tested negative.

On Wednesday, four Chinese people and two Ugandans were convicted in Kampala forof disobeying lawful orders after escaping quarantine five days early and attempting to reach the Democratic Republic of the Congo. Two later tested positive for coronavirus. The group – who arrived in Uganda from China on March 10th – will be sentenced next month.