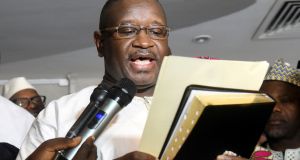 The candidate who lost Sierra Leone’s presidential run-off vote has said his party intends to challenge the results in court.

Defeated candidate Samura Kamara said in an interview broadcast on national television that “the results did not reflect the will of the voters”. He said his APC party would to take “appropriate legal action”.

The election marks the first time in a decade that the SLPP party has won the presidency.

Mr Bio has pledged to work for national unity in the west African country of seven million people. He faces a parliament that is dominated by the APC party.

Mr Bio pledged to govern for all Sierra Leoneans at the ceremony.

He won Saturday’s run-off vote with 51.81 per cent of valid votes cast, the commission said.

More than 2.5 million people, or 81 per cent of eligible registered voters, cast ballots in the run-off, said the election commission’s chairman.

Tensions rose after there was no clear winner of the March 7th first round election. The SLPP has not held the presidency since 2007.

The run-off vote had been set for March 27th but was delayed after a ruling party member filed a court challenge alleging irregularities in the first round and a temporary injunction was issued, stalling preparations.

The high court lifted the injunction last week, allowing the second round to take place on Saturday.

The winner will now lead efforts to continue rebuilding the country after the devastating 2014-2016 Ebola epidemic as well as a deadly mudslide in August that killed about 1,000 people in the capital, Freetown.

The election is the fourth since Sierra Leone’s brutal civil war ended in 2002, and the previous vote in 2012 was largely peaceful.

Outgoing president Ernest Bai Koroma has served two terms and was barred by the constitution from running again. – AP