Cyril Ramaphosa pledges to ‘turn the tide of corruption’ 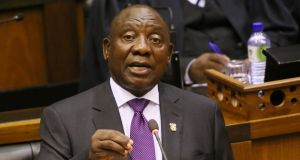 Cyril Ramaphosa promised to “turn the tide of corruption” in his first speech as South Africa’s president, saying the nation was entering a “new dawn” following a tumultuous week that culminated in the resignation of former leader Jacob Zuma.

“We should put behind us the era of diminishing trust in public institutions and weakened confidence in our country’s public leaders,” Mr Ramaphosa said on Friday in the annual state of the nation address to parliament. “We should put all the negativity that has dogged our country behind us because a new dawn is upon.”

Mr Ramaphosa, a former union leader and one of the country’s wealthiest black businessmen, was hastily sworn in as president on Thursday after the ruling African National Congress (ANC) forced Mr Zuma to step aside.

Mr Zuma’s nine years in office were marred by allegations of corruption, economic malaise and dipping support for the ANC. Mr Ramaphosa has vowed to turn around Africa’s most industrialised economy and restore the credibility of the ANC ahead of 2019 elections, when the party is expected to face a stiff test to retain its 24-year dominance of South African politics.

“This is the year in which we will turn the tide of corruption in our public institutions,” Mr Ramaphosa said, while attacking the “plunder of public resources”.

He praised police and prosecutors for “taking initiatives that will enable us to deal effectively with corruption”, a reference to investigations into the Guptas, a business family accused of using Mr Zuma’s friendship to influence government decisions and win state contracts.

State-owned enterprises whose finances buckled under the alleged corrupt influence of the Guptas would be restored “to much better health”, Mr Ramaphosa said.

The Guptas and Mr Zuma have repeatedly denied any wrongdoing. But police raided the Guptas’ Johannesburg home this week. Police announced on Thursday that Ajay Gupta, one of the family’s three brothers, was a fugitive from justice and should turn himself in.

MPs booed as Mr Ramaphosa thanked Mr Zuma for “the manner in which he approached this very difficult and sensitive [resignation] process”.

The former president, who took office in 2009 and was serving his final term, had resisted ANC calls to step aside, only doing so when the ANC took the unprecedented decision to co-operate with opposition parties and hold a no-confidence vote against him in parliament. Mr Zuma delivered an unrepentant and defiant resignation speech the night before that vote was scheduled to take place.

The state of the nation address, which sets out landmark government policies for the year, was postponed last week because of the standoff with Mr Zuma.

Mr Ramaphosa now faces the daunting challenge of reviving the economy, healing deep divisions within the ANC and responding to populist trends in the party and country, as frustrations grow over rampant unemployment and poverty.

In Friday’s address Mr Ramaphosa pledged to carry out an ANC policy of expropriating white-owned land without compensation. But he said land reform should be “implemented in a way that increases agricultural production and improves food security”.

Mr Ramaphosa also extended an olive branch to the mining industry, one of the country’s biggest employers, which has endured years of regulatory uncertainty. A controversial government charter for the sector will be revisited, he said.

“We will intensify engagements with all stakeholders on the mining charter to ensure that it is truly an effective instrument to sustainably transform the face of mining in South Africa, ” Mr Ramaphosa said.

Mr Ramaphosa’s address contrasted with those given by Mr Zuma in recent years, which were routinely marred by walkouts by opposition parties and scuffles. Mr Ramaphosa joked with opposition leaders and there were no disruptions.

He also sought to soothe lingering racial tensions, saying South Africa was a country that belonged to all who lived in it. – Copyright The Financial Times Limited 2018