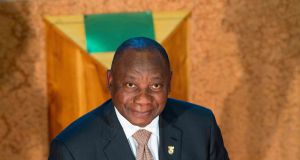 South African president Cyril Ramaphosa: African National Congress has chosen to back his efforts to tackle corruption in the party. Photograph: Rodger Bosch/AFP

The African National Congress has chosen to back South African president Cyril Ramaphosa’s stand against corruption in the party, a decision that has raised the stakes for all involved in the ANC’s internal factional battles.

Ramaphosa emerged from the ANC’s national executive committee (NEC) meeting last weekend with the strongest hold he has had over the party since edging its leadership race in December 2017, political analysts say.

Ahead of the meeting Ramaphosa called on the NEC to purge party officials charged with corruption, but such is the scale of infighting in the ANC’s top decision-making body, it was unclear if his plea would garner much support.

For the past decade the ANC has tended to remove members accused of corruption from their party roles only after they have been convicted of a crime, saying officials are innocent until proven guilty.

Indeed, South Africans had begun to doubt the repeated promises Ramaphosa has made since 2017 to tackle corruption, given that so few high-ranking ANC officials accused of wrongdoing have faced trial or even been charged.

But the level of public outrage over allegations that numerous ANC officials were involved in Covid-19-related tender fraud appears to have galvanised the 88-member NEC to back Ramaphosa.

On Monday, the NEC said that it fully agreed with its leader that party members charged with corruption should step aside from all ANC and government positions until cleared of wrongdoing.

In addition, they must appear before the party’s integrity commission, which Ramaphosa promised to beef up with extra resources and powers to conduct investigations.

The NEC’s stance is seen as a significant blow to powerful figures in the ANC linked to South Africa’s former president, Jacob Zuma, who is facing trial for corruption. These include its general secretary, Ace Magashule, who is also implicated in public sector tender fraud.

Zuma and his supporters had tried to undermine Ramaphosa ahead of the NEC meeting, accusing him of betraying the ANC by accepting campaign donations from white business interests before the party’s 2017 electoral conference.

In response, Ramaphosa committed to appearing before the integrity commission, which suggests he is confident he has done nothing wrong.

Mcebisi Ndletyana, an associate professor at the University of Johannesburg’s department of politics and international relations, called the NEC’s decision “a watershed moment” that should restore momentum to Ramaphosa’s faltering presidency.

However, he warned that if party officials accused of corruption are not charged soon, any renewed public faith in the president could be short-lived.

“If ANC leaders accused of corruption are not charged before next year’s local elections, his promises will likely backfire on him at the polling booths,” he said.

Although the National Prosecuting Authority has said high-profile politicians linked to corruption will be charged imminently, getting them to stand down from their government roles may prove more difficult.

Legal experts say there are no laws in South Africa to force elected government officials to step down while they face criminal charges – a situation that could undermine the ANC with voters when it hits the campaign trail in 2021.