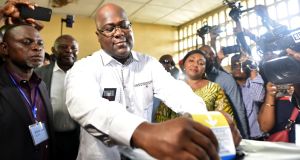 Felix Tshisekedi, leader of the Congolese main opposition party, the Union for Democracy and Social Progress, casts his ballot at a polling station in Kinshasa. Photograph: Olivia Acland/Reuters

The Democratic Republic of Congo voted on Sunday for a successor to long-serving President Joseph Kabila after a tense campaign the opposition said was marred by crackdowns and disruptions.

The current president, in power for almost 18 years, is barred by the constitution from running for a third term, having won elections in 2006 and 2011. Voters will also select national and provincial legislators.

Congo, Africa’s biggest copper producer and a key source of minerals essential to the smartphone and electric-vehicle industries, could be on the verge of its first transition of power through the ballot box since independence in 1960.

Despite the presence of more than 16,000 United Nations peacekeepers in the vast central African country, the government took the unusual step to refuse logistical support from the UN and financial assistance from international donors to organise the vote. It also barred some foreign observers, including the European Union.

“We committed to financing our electoral process entirely ourselves for the very first time in our history,” Kabila said on state television late on Saturday. “For us, it’s an effort to shield our country from foreign interference liable to thwart the will of self-determination of our people.”

The opposition accuses the electoral commission, known as CENI, of preparing an election that’ll be neither free nor fair, citing several incidents that occurred in the run-up to a vote that was already two years overdue.

The commission pushed back the polls by another seven days from December 23rd, blaming a fire at one of its warehouses in the capital, Kinshasa, and also suspended campaigning three days early in the city as Fayulu was planning a mass meeting.

The authority then postponed elections in three parts of the country until March, citing an Ebola outbreak, militia attacks and inter-communal violence. That effectively disenfranchised 1.2 million of Congo’s 40 million registered voters in regions known as strongholds of Kabila’s critics.

The commission has also been criticised for importing tens of thousands of touchscreen voting machines from South Korea. While it said casting a ballot should take 90 seconds per person, scores of voters in Kinshasa and Goma said they took much longer.

Provisional results of the presidential contest are due to be announced on January 6th and the final decision on January 15th. The next head of state is scheduled to be sworn in three days later. – Bloomberg