Coronavirus: Africa prepares for surge in cases and mass casualties 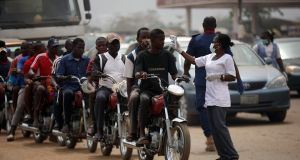 Motorcyclists have their temperature measured on a road outside the Nigerian capital, Abuja. Photograph: Kola Sulaimon/AFP via Getty

As Africa prepares for a surge in coronavirus cases, the lack of intensive care beds and ventilators in many countries is becoming starkly apparent.

On Monday there were were more than 4,880 confirmed coronavirus cases across the continent, with these numbers expected to drastically rise, hitting a peak in two or three weeks, according to the United Nations Economic Commission for Africa.

Dr Dorian Job, programme manager for west Africa for Médecins Sans Frontières, said the medical charity was preparing for a “mass casualty” situation, similar to what would happen in a war zone.

That meant a triage system would be implemented where attention was focused on patients who needed help but had a good chance of survival. Around 2.5 percent of people who contract coronavirus, also known as Covid-19, were expected to have a “very poor chance” and would be given “humanity and palliative care” instead.

“There will not be enough ventilators for sure,” said Dr Job. “Everybody is looking for ICU, for ventilation, but the market is saturated. Everybody has done their shopping and everybody is keeping the stock for their own.”

The World Health Organisation has publicly shared information about how prepared African countries are to deal with the pandemic.

One aspect of the data focused on how many ICU beds there are. In Malawi, a country of nearly 19 million people, there are around 20, according to the WHO figures.

Liberia has roughly 25 beds for five million people and Sierra Leone has “essentially none” for a population approaching eight million. In Namibia’s public sector, the WHO data says there are eight ICU beds for 2.5 million people – though the government said it had 18 last year.

A study published in February found that Uganda has 55 intensive care beds, which equates to 1.3 beds per million people. Somalia, which is already grappling with conflict and drought, and declared a national emergency earlier this year as a result of locust swarms, has less than 20 ICU beds, according to the Associated Press.

Sinead Walsh, the EU ambassador to South Sudan, told The Irish Times Confronting Coronavirus’ podcast that there were two ventilators in the country of twelve million people.

“In a country like South Sudan when we think about what vulnerability will mean, if and assuming when we do get this virus, there’s going to just be large swathes of the population that would fit into that group of having pre-existing medical conditions or being very weak,” she said.

“A lot of the places where we work lack even basic healthcare infrastructure, let alone ICU care,” said Crystal Wells, Africa spokeswoman for the International Committee of the Red Cross, about the challenges around Covid-19 spreading. “People often have to walk hours or days to even walk to a clinic, let alone walk to a hospital. We already see people dying because of very preventable diseases.”