Another lion was illegally killed by an American in April, Zimbabwe says 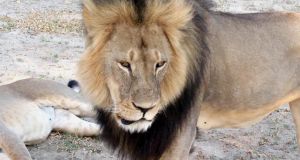 The protected lion known as Cecil, which was killed by American dentist Walter Palmer. Photograph: Paula French via AP

Another American illegally hunted and killed a lion in Zimbabwe several months ago, officials say amid an international outcry over the US hunter accused of illegally killing a well-known lion named Cecil, above, in early July.

This American was identified as Jan Casimir Seski of Pennsylvania, by Zimbabwe’s National Parks and Wildlife Management Authority. It said Dr Seski killed the lion with a bow and arrow in April around Zimbabwe’s Hwange National Park.

Dr Seski is a gynaecological oncologist. He is also an active big-game hunter, according to safari outfitters and bow-hunting sites that have posted pictures of kills identifying “Dr Jan Seski” as the man standing next to killed animals including elephants, a hippo and an ostrich.

National Parks spokeswoman Caroline Washaya Moyo said Dr Seski had provided his name for a government database when he came for the hunt.

“The American conducted his hunt in an area where lion hunting is outlawed,” she added.