ANC may live to regret Zuma’s sacking of communist minister 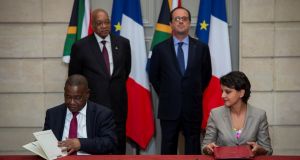 The South African Communist Party has warned that President Jacob Zuma’s decision to remove its leader from cabinet has brought its alliance with the ruling African National Congress to “the brink of disintegration”.

Without warning on Tuesday, Mr Zuma sacked higher education and training minister Dr Blade Nzimande in his second cabinet reshuffle of the year, which also changed the leadership at the key energy ministry.

In total there were six changes made to cabinet; five of these involved ministers shifting from one portfolio to another. Mr Nzimande, who is also the communist party general secretary, was the only minister removed from the executive. He was replaced by Hlengiwe Mkhize, the former home affairs minister.

The decision to get rid of Mr Nzimande is seen by the communist party as Mr Zuma’s response to its ongoing opposition to his rule. The communist party claims the president is facilitating widespread corruption in government.

A statement released by the party called the cabinet reshuffle a “direct attack” on it that disregarded alliance protocols and relations. It also plunged the three-way partnership that includes union federation Cosatu and the ruling ANC “into uncharted waters”, the party said.

It added: “It is a well-known fact that the malady of corruption, governance decay and state capture has worsened exponentially under the incumbency of President Zuma and his friends, the Gupta family [businessmen accused of having undue influence over Mr Zuma].

“If the president thinks that by removing Dr Nzimande from the cabinet he will silence the [communist party] from the leading role it has played to expose and confront state capture, he is glaringly mistaken!”

If the communist party were to pull out of the tripartite alliance it could have grave repercussions for the ANC when it turns to campaigning ahead of the 2019 general election, which is already expected to be closely fought.

Cosatu and the South African Communist Party first entered into the tripartite alliance with the ANC in 1990 to oppose white minority rule. However, post-1994 the alliance was reconfigured to unite the largest possible cross-section of South Africans around the ANC’s efforts to develop the country’s young democracy.

In line with this goal, the communist party and Cosatu have campaigned for the ANC during general elections, rather than contesting them. In return their senior officials are given top positions in ANC-led governments to ensure they have input in relation to policy direction.

ANC secretary general Gwede Mantashe responded to the sacking of Mr Nzimande by saying it was “a pity” because he had “done well in education”.

There were also concerns expressed around the appointment of David Mahlobo as the new energy minister. Analysts believe the former state security minister has been moved to his new role to push through a nuclear power deal with Russia that critics say the country cannot afford.