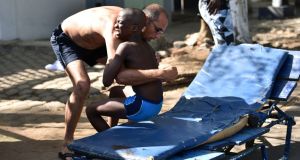 Only a few years after French troops broke up its desert stronghold and scattered its fighters into the dunes, al-Qaeda’s branch in West Africa has regrouped and extended its reach, storming into new territory across three nations.

The setting for its new attacks: fancy West African hotels where fighters can strike local elites and westerners, many hundreds of miles from the militants’ former base in northern Mali. They have killed dozens of people in recent months, including sunbathers lounging at a seaside resort in Ivory Coast last Sunday, prompting the US military to call al-Qaeda’s West African affiliate one of the world’s most enduring Islamist terrorist groups.

Almost four years ago, the group, known as al-Qaeda in the Islamic Maghreb [\AQIM], had reached its zenith, ruling over a remote stretch of northern Mali the size of Texas. But when it started creeping south toward the capital, Bamako, French troops rushed in, chasing the militants across the desert, where they were believed to have suffered catastrophic losses.

Now, the group is making a devastating comeback. Until relatively recently, it was best known around the world for kidnapping westerners in remote parts of the Sahel and using the ransoms to support itself. But its recent assaults on three enclaves for expatriates and African elites – in Ivory Coast, Burkina Faso and Mali – seem to be patterned after the kind of big, shocking terrorist attacks carried out by rival extremist groups like Islamic State.

“For AQIM, this is an evolution in terms of tactics and targeting,” said Andrew Lebovich, a visiting fellow at the European Council on Foreign Relations who has tracked the group for years. “It shows a broadening of the group’s appeal and much more staying power than many people thought.”

The group’s latest attacks have put the entire region on edge. With each strike, extremists linked to al-Qaeda seem to be checking off countries on the map. They stunned the world by seizing the Radisson Blu hotel in Bamako in November, killing 19 people. Then they crossed the border into Burkina Faso and Ivory Coast, pushing into new terrain. Western-friendly capitals known for religious tolerance are now especially fearful, wondering who will be next.

“No country in the world, even Senegal, is safe from an attack,” President Macky Sall of Senegal told reporters several weeks ago as armed guards in his peaceful country were dispatched in the capital, Dakar, along main roads and in front of hotels and shopping areas. Security in countries across the region has increased, with new barriers and metal detectors outside coffee shops and other businesses that cater to foreigners.

On Monday, al-Qaeda in the Islamic Maghreb said it had attacked the resort area over the weekend in revenge because Ivory Coast had handed over prisoners to Mali. But it also described the siege as part of its continuing “plan to target the dens of the crusaders and locations of their gatherings,” according to a translation released by the SITE Intelligence Group, which tracks extremist organisations.

“We repeat our call to all countries involved in the French invasion of Mali to withdraw from this satanic alliance,” it said.

With the carnage left behind, the attacks are pummelling the economy and psyche of the region. Tourism is declining, hurting hotels that are already spending more on security. Governments worry that it will be harder to lure international companies, and organisations based in nations that have been hit are finding recruiting difficult.

US defence officials worry that the group’s push into new areas could have far-reaching ramifications. If the authorities chase the militants south, they risk letting up on patrols in the northern part of Mali. That stretch of sparsely populated desert, lined by lightly controlled borders, could become a new haven for the thousands of fighters with Islamic State in Libya. Islamic State appears to be pushing south, too, according to US military experts on counterterrorism in Africa.

Al-Qaeda in the Islamic Maghreb has had international ambitions since the central leadership of al-Qaeda bestowed member status on it in 2006. The group showed its muscle in 2007 with a major attack on a United Nations compound in Algiers. Then, in 2012, its militants helped take control of roughly 300,000 square miles of terrain across northern Mali.

Among the group’s most notorious figures is Mokhtar Belmokhtar, a one-eyed Algerian operative who has endeared himself to locals by setting up medical clinics and helping with livestock. Belmokhtar has been targeted in strikes and is rumoured to be dead, but many analysts believe he is alive. He has sometimes argued with the leadership of al-Qaeda and its West African branch, resulting in a series of mergers and splits, including the creation of new groups loyal to him.

After French troops swooped in to beat back the militants in Mali, Belmokhtar struck back in devastating fashion. He branched out with a new group, Al Mourabitoun, and seized more than 600 employees of a gas plant in Algeria, killing 38 people.

But in the ensuing months, al-Qaeda in the Islamic Maghreb suffered major defeats at the hands of the French. The group has long been plagued by infighting, and though it has been around for years, it has lost members to Islamic State. One of the militants involved in the November 13th attacks in Paris was a veteran of the jihad during al-Qaeda’s peak in Mali. The attacker is believed to have left Mali and joined Islamic State in Syria before resurfacing as one of the suicide bombers at the Bataclan concert hall in Paris.

In all, US military officials say there could be as many as 1,000 fighters with Islamic State in Libya who came from sub-Saharan Africa. The loss of fighters may be behind a new pact between al-Qaeda in the Islamic Maghreb and Al Mourabitoun. The two announced late last year that they had joined forces and that the Radisson Blu attack had been their first joint venture.

Some US analysts said the merger most likely signalled that the leaders of the two groups – Abdelmalek Droukdel and Belmokhtar, both Algerians and often rivals – had settled their differences at least temporarily to strengthen their brand in the face of defections to the Islamic State.

“AQIM and Al Mourabitoun are trying to say: ‘Look, we’re still alive. We’re here,’” said Bakary Sambe, director of the Timbuktu Institute and Dakar coordinator for the Observatory on Religious Radicalism and Conflicts in Africa.

In recent months, there have been other signs that al-Qaeda’s regional branch is rebounding. In March 2015, gunmen stormed the popular Rue Princesse, a hip Bamako street lined with boutiques and nightclubs. They killed five people with machine guns and grenades at a bar, La Terrasse. Then, in August, the group hit a hotel used by UN workers in central Mali.

Al-Qaeda’s regional affiliate has tried to use the attacks to stay relevant in an increasingly complex militant landscape. Last Sunday, it even translated its responsibility statement for the Ivory Coast assault into multiple languages, including French, a marketing tactic adopted by Islamic State.

The instability has proved trying for the region’s governments. In Ivory Coast, President Alassane Ouattara, who began his second term last autumn, is governing a split nation: Many still support former president Laurent Gbagbo, who is facing trial on charges of crimes against humanity. Burkina Faso is still reeling from a short coup in September. The new president, Roch Marc Christian Kabor, had not even named his cabinet ministers when gunmen stormed the Splendid Hotel and Cappuccino Cafe in January, killing at least 20 people.

“Those who were in charge for a long time of the military intelligence and national security services have been replaced by newcomers who do not have the same expertise and experience,” said Paul Oumarou Koalaga, executive director of Diplomacy and Peace International, based in Burkina Faso’s capital, Ouagadougou.

The violence by an array of terrorist groups in Africa may be indicative of growing competition. One US military counter-terrorism official said that Boko Haram, the extremist group that has terrorised northern Nigeria for years, might be trying to increase its body count to uphold the bloody standard of Islamic State, to which it has pledged allegiance. Al-Qaeda in the Islamic Maghreb, in turn, seems to be trying to keep up with the bloodshed.

Each of the militant groups competes for essentially the same things: recruits, credibility and cash, all of which are scarce. Strikes on soft targets such as hotels are not particularly complicated operations, and are far easier and cheaper to pull off than controlling large swaths of land.