Iran launches missiles at US military bases in Iraq

Footage that reports to show ballistic rockets being fired from Iran at Iraqi bases hosting US military forces has been broadcast on Iranian television. 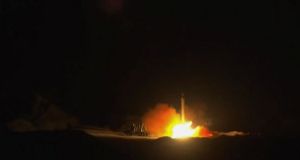 An image grab from footage obtained from the state-run Iran Press news agency allegedly shows rockets launched from the Islamic republic against a US military base in Iraq on Tuesday night. Photograph: Iran Press /AFP via Getty Images)

The Pentagon confirmed that Iran launched more than a dozen ballistic missiles in a targeted attack at about 1.30am local time (10.30pm Irish time on Tuesday). Iranian state television said Iran had fired 15 missiles at US targets.

“It is clear that these missiles were launched from Iran and targeted at least two Iraqi military bases hosting US military and coalition personnel at Al-Assad and Irbil,” the US department of defence said in a statement.

The Islamic Revolutionary Guard Corps (IRGC) announced it had fired the missiles as “hard revenge” for the death of Suleimani, and warned that any further aggressions would “bring about more painful and crushing responses”.

Iranian officials said Tehran did not want a war and its strikes “concluded” its response to Friday’s killing of Suleimani. There have been no US reports of casualties. However, Iranian state television said 80 “American terrorists” had been killed and US helicopters and military equipment damaged. It did not provide evidence of how it obtained that information.

Germany, Denmark, Norway and Poland said none of their troops in Iraq were hurt. Britain, which also has personnel in Iraq, condemned the Iranian action. Iraq said its forces did not suffer casualties.

Iraqi prime minister Adel Abdul Mahdi had received word from Iran that its response to the US killing of its top general was either imminent or under way, his spokesman said on Wednesday.

“Shortly after midnight on Wednesday we received a verbal message from the Islamic Republic of Iran that the Iranian response to the assassination of the martyr Qassem Suleimani had started or was about to start,” his spokesman said.

Tehran told Mr Abdul Mahdi it would only target locations where US forces were present but did not specify the locations, the spokesman said in a statement.

All is well! Missiles launched from Iran at two military bases located in Iraq. Assessment of casualties & damages taking place now. So far, so good! We have the most powerful and well equipped military anywhere in the world, by far! I will be making a statement tomorrow morning.

In a sign that Mr Trump could refrain from a major retaliatory response, the president tweeted late on Tuesday night: “All is well! Missiles launched from Iran at two military bases located in Iraq. Assessment of casualties & damages taking place now. So far, so good!,” he wrote.

“We have the most powerful and well equipped military anywhere in the world, by far!”

Similarly, Iran’s foreign minister Javad Zarif tweeted that Iran did not seek “escalation or war” and suggested that it had “concluded” its mission.

“Iran took & concluded proportionate measures in self-defense under Article 51 of UN Charter targeting base from which cowardly armed attack against our citizens & senior officials were launched,” he wrote. “We do not seek escalation or war, but will defend ourselves against any aggression.”

On Wednesday morning, Iran’s supreme leader Ayatollah Ali Khamenei said the United States should withdraw from the region and said Tehran’s missile attacks on US targets in Iraq were “a slap on the face” for America.

“Military action like this is not sufficient. What is important is ending the corrupting presence of America in the region,” Mr Khamenei said in a televised speech, ruling out any resumption of talks with Washington about a 2015 nuclear deal. Mr Khamenei also said the United States was trying to remove Lebanon’s Iranian-aligned movement Hizbullah in its bid to help Israel.

The attacks were the first time Iran has directly hit targets in Iraq since the Iran-Iraq war of the 1980s and mark a dangerous escalation in tensions in the Gulf region. The US Federal Aviation Administration said it would ban US airlines from operating in the airspace over Iraq, Iran, the Gulf and the Gulf of Oman. Other airlines also issued warnings about flying over the region.

Senior national security figures convened at the White House on Tuesday evening, including secretary of state Mike Pompeo, chairman of the joint chiefs of staff Mark Milley and defence secretary Mark Esper. The national security team met with Mr Trump for about an hour.

The US military had been on high alert throughout the day about possible Iranian drone strikes aimed at US bases in the Middle East, such as Iraq, Kuwait, the United Arab Emirates and Saudi Arabia. Approximately 5,000 US troops are stationed in Iraq, with approximately 50,000 troops across the Middle East. Thousands more are en route as the US steps up its security preparations in the region.

Millions of Iranians took to the streets to mourn the death of Suleiamni, a revered military commander. Dozens of people were killed in a stampede in a procession in his home town, the culmination of days of commemorations.

Earlier on Tuesday, Mr Trump said that he was “totally prepared” for any Iranian retaliation for the killing of Suleimani, describing the slain general as a “monster”.

Mr Trump insisted that the US decision to target and kill the top Iranian commander last week was defensive. “He was planning a very big attack, a very bad attack for us and other people, and we stopped it,” he said. “We saved a lot of lives by terminating his life. We did ourselves and we did a lot of countries a big favour . . . He was a monster and he’s no longer a monster. He’s dead.”

Amid deepening tensions between Washington and Baghdad over the Suleimani killing which took place in Iraqi territory, Mr Trump said the US was not withdrawing from Iraq imminently despite the non-binding resolution passed by the Iraqi parliament on Sunday voting to expel all foreign troops from the country. “At some point we want to get out but this isn’t the right point,” said Mr Trump, adding that Iraq should be allowed to run its own affairs.

But he also claimed it would be “the worst thing that could happen to Iraq” if the US withdrew from the country. He added that the US should be treated with respect in Iraq.–Additional reporting Reuters