Work on Grafton Street to start after June bank holiday 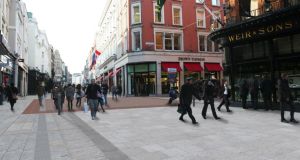 A computer generated image of what the new granite paving on Grafton Street will look like. Photograph: Dublin City Council

The revamp of Dublin’s Grafton Street is set start after the June bank holiday weekend.

The current red brick surface will be replaced with more durable granite paving at a cost of €4 million.

The work will take 18 months to complete. The street will stay open to pedestrians during this period but access for delivery vans will be restricted.

After the paving along Grafton Street is replaced Dublin City Council hopes to replace the red brick along the adjacent streets.

The current paving was being replaced because it had become damaged and worn, requiring daily repairs, said the council.

* Speaking at an event marking the revamp today, Dublin’s Lord Mayor Naoise Ó Muirí has said he is “sceptical” about the presence of a ghost in the Mansion House after revealing in a newspaper that his daughter said she saw a girl in the 300-year-old residence.

Mr Ó Muirí said his 4-year-old daughter Bríona told his wife Fionnuala that she saw a dark curly-haired girl sitting in the living room of the house. She saw the girl after she followed her older sister into her parents’ room during the night last February. The following day she told her mother about it.

“I’d be a sceptic but it’s a house which has a great character,” he said. “She could have been dreaming I’m not sure what it was,” he told The Irish Times.

He said Bríona had not mentioned any other incidents since but that he was “not inclined to discuss it with her”. Neither he nor his wife were nervous in the house since but he said “we won’t be staying for much longer ”. His term ends in next month when the family will move back to their house in Drumcondra.