Works by Elizabeth Hawkins-Whitshed and Jane Shackleton on show in Laois, Wicklow 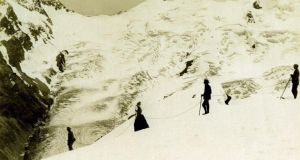 ‘Queen of the Mountain’, by Elizabeth Hawkins-Whitshed, from the Elizabeth Main le Blond collection in the Martin and Osa Johnson Safari Museum, Kansas. 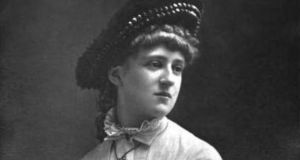 Elizabeth Hawkins-Whitshed, photographed around the time of her marriage to Col Fred Burnaby.

Two Irish women photographers of the late Victorian era whose achievements have largely gone unnoticed are the subject of separate exhibitions in Laois and Wicklow.

Jane Shackleton tramped through the countryside of 19th century industrial midlands, as well as the Aran Islands, recording much of what she saw on glass photographic plates. Elizabeth Hawkins-Whitshed, from Greystones in Co Wicklow, did much the same in Switzerland, Italy and Norway, gathering en route an extraordinary record of life in St Moritz, mountaineering in the Swiss Alps and the extreme north of Norway, winter sports and cycling in Italy, where she visited numerous formal gardens.

The work of both women has hitherto been known to relatively few people. Now, the works of both are the subject of separate exhibitions – Shackleton in Mountmellick Public Library; Hawkins-Whitshed via a novel window display in shops and restaurants in Greystones.

Jane Shackleton (nee Edmundson) married into the Shackletons, a Quaker family that ran several mills in the midlands. The Shackleton pictures, several dozen from a family-held collection of some 1,000 images taken mainly in the 1880s and 1890s, reflect their interest in industry – the Grand Canal with its locks, barges and warehouses, and grain mills – and her own interest in the Aran Islands, its people and their occupations.

Archaeologist Chris Corlett came across some of Shackleton’s images in the Royal Society of Antiquaries of Ireland, of which she had been a member. “She had a real interest in industrial buildings and waterways and would have recognised, probably because of the family business, the value of industrial architecture,” he said.

The Hawkins-Whitshed photographs in Greystones are part of a 2,000-plus collection held by the Martin and Osa Johnson Safari Museum of Chanute, Kansas. Raised in Greystones, Elizabeth Hawkins-Whitshed was introduced to society in London aged 18 and promptly married Col Fred Burnaby, a larger-than-life soldier in the horse guards killed in 1885 trying to rescue Gordon of Khartoum. The Burnaby estate, Ireland’s first planned housing estate which she created in Greystones, is named is his memory.

Ill-health soon drove her to Switzerland where, despite a weak chest, she plunged headlong into mountaineering, conquering (in a skirt) numerous hitherto unclimbed peaks, as well as tobogganing, skating, tennis and cycling.
Details on both events from Facebook Mountmellick and
theburnaby.com

Peter Murtagh is involved in the Burnaby Heritage Weekend.