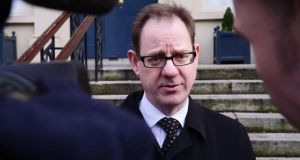 Bernard Harbour: “Impact will take the view that if there are changes they cannot be at the cost of Impact members.” Photograph: Cyril Byrne

Trade unions have again warned of industrial action if the Government moves unilaterally to cut the pay of public service staff following rejection of the proposed Croke Park II agreement.

The secretary of the public service committee of the Irish Congress of Trade Unions (Ictu), Tom Geraghty, said there would undoubtedly be a campaign of industrial action if the Government moved to cut pay.

He was speaking following a meeting of the committee which noted that a majority of affiliated unions had rejected the proposals for a new Croke Park agreement. He said he would be writing formally to the Government to advise it of this position.

He confirmed there had been no communication from the Government since union members voted to reject the proposals. He also said there was no indication the Government was interested in seeking to “tweak” the deal that had been rejected.

Mr Geraghty said there had been no discussion at Wednesday’s meeting about the current Croke Park agreement but it had always been the committee’s position that it was expected to last until 2014.

Ictu’s overall executive council also said it was committed “to resisting any attempt by Government to unilaterally impose pay cuts across the public sector”.

In a statement issued after a meeting, it said it “reaffirmed that changes could only be brought about by way of consultation and negotiation”.

Separately, the largest public service union, Impact, said if the Government sought to “clarify” aspects of the proposed deal to encourage any union which rejected the proposals to rethink its position, it could not be at the expense of Impact members.

Speaking on RTÉ radio, Bernard Harbour of Impact said the most likely reaction of the Government in the interim period would be that it would seek to chage or clarify the Croke Park II proposals which had been the subject of the recent ballot of union members.

“Impact will take the view that if there are changes they cannot be at the cost of Impact members. We are not going to be in a position in which the Government says we have to save €1 billion and what we are goingto do is to make this worse for Impact members to placate other unions.”

He said another possibility was that the Government would seek to impose a worse package than that which had been balloted upon and in such a scenario there would be resistance from Impact and other unions.

Meanwhile, speaking last night in advance of the Psychiatric Nurses’ Association annual conference in Galway, the association’s general secretary, Des Kavanagh, said he welcomed the acceptance of the public services committee “that ordinary members of trade unions are not prepared to accept the unfair and inequitable Croke Park II proposals despite the determined efforts of Government and some trade union leaders, including the use of threat and blackmail, to push for a Yes vote”.