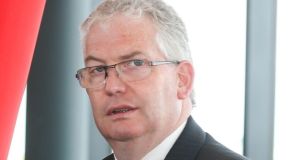 Tony O’Brien of the HSE: expected to tell the Dáil Public Accounts Committee that between 1998 and 2009 more than €3.3 million in funding was paid into an unauthorised bank account. Photograph: Maxwells

Trade unions have refunded more than €1 million following audits carried out by the HSE over recent years into controversial payments made by various parts of the health service under social part nership initiatives.

The director general-designate of the HSE Tony O’Brien is expected to tell the Dáil Public Accounts Committee that between 1998 and 2009 more than €3.3 million in funding was paid into an unauthorised bank account by the Office of Health Management, the (State-funded) Skill training programme and the Health Service National Partnership Forum.

The Public Accounts Committee will today hold a special hearing into a recent report carried by the Comptroller and Auditor General into how millions of euro in State funding ended up in a bank account controlled by two individuals closely associated with the trade union Siptu.

Levy fund
Siptu has argued that corporately it was unaware that State money had been paid into the account, known as the Siptu national health and local authority levy fund.

The comptroller found that €2.2 million paid into the account was spent on training programmes and grants, which appeared to be in line with the partnership objectives set out by those who paid over the money.

Hospitality
However the report also highlighted that nearly €600,000 was spent on on foreign travel, €348,000 on marketing and promotions and €99,000 on hospitality, which was less clearly within the scope of the funding objectives.

The report gave details of 18 additional foreign trips undertaken by trade union officials, senior public service officials and others which had not been previously known about publicly.

Trade union figures, public servants and others are understood to have undertaken 74 foreign trips in total.

Mr O’Brien is expected to tell the committee that to date refunds of more than €1.02 million have been received from five trade unions following on from HSE audits, including more than €27,000 from two unions since the publication of the comptroller’s report earlier this year.

Mr O’Brien is expected to acknowledge there were unprecedented failures in governance and control over how State money was spent.

Siptu general secretary Joe O’Flynn is expected to tell the committee the union had been damaged by the controversy.