Fishermen got into difficulty while setting lobster pots off Dunmore East 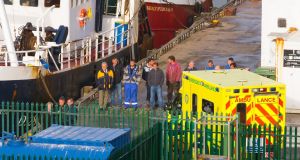 An ambulance at Dunmore East harbour, Co Waterford, where the bodies of brothers Paul (50), Kenny (47) and Shane Bolger (45), from Passage East, were brought ashore by the RNLI vessel to a waiting ambulance. Photograph: Patrick Browne

The fishing community on the southeast coast was in shock last night after three brothers perished at sea yesterday when they got into difficulty while fishing off Dunmore East in Co Waterford.

Brothers Paul (50), Kenny (47) and Shane Bolger (45) from Passage East left Dunmore East in their 20ft wooden punt, the Dean Leanne, at about midday to set their lobster pots off Brownstown Head between Dunmore and Tramore.

All three were experienced fishermen and when they failed to return as expected yesterday afternoon, fishermen in Dunmore East raised the alarm and contacted the Irish Coast Guard, who launched a major search operation at about 5.30pm.

The Irish Coast Guard Sikorski helicopter based at Waterford, Rescue 117, located one of the casualties near the sand bar at Rinnshark, south of Brownstown Head, at 5.55pm. The RNLI Dunmore East Lifeboat, Elizabeth and Ronald, under cox Michael Griffin, was also tasked and proceeded to the scene where the crew located the bodies of the other two men by 6.10pm.

Both were pronounced dead at the pier side by a local GP and were taken by ambulance to Waterford Regional Hospital in Ardkeen where the other casualty had been taken after Rescue 117 landed at Waterford Airport.

About 20 relatives and friends of the missing fishermen had gathered on the pier side waiting for news.

It is understood the three men were last seen fishing at about midday near Brownstown Head. All three were found wearing their personal flotation device, suggesting that they may have been in the water for some hours and may have died from hypothermia.

Informed sources say the Bolgers’ punt was equipped with an electronic position indicating radio beacon, which should activate once it is submerged in water, but it didn’t activate as the boat didn’t capsize, although she had taken on some water.

The exact cause of the tragedy was unclear last night.

Two of the deceased are married or have partners and together they leave behind three children. The third man was single.