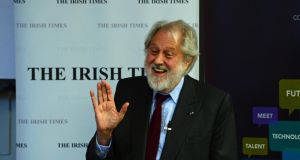 Ireland must move on from the politics of the past and actively embrace a digitally-based future, according to Academy Award winning producer David Puttnam.

Lord Puttnam, who was named as the country’s ‘Digital Champion’ by Minister for Communications Pat Rabbitte last year, said failure to move beyond Civil War politics was hampering Ireland’s ability to address the issue of youth unemployment and to provide decent educational opportunities for all.

“We simply cannot afford not to embrace the possibilities that arise from ICT,” he said. “We as humans must upgrade our skills as regularly as we upgrade our technology.”

Lord Puttnam, who has lived in Skibbereen, Co Cork for more than 20 years, made his comments at a Dublin Chamber of Commerce breakfast seminar hosted by The Irish Times.

He said there was a need to accelerate Ireland’s ICT learning capacity and to provide nationwide broadband connectivity that is “as ubiquitous as electricity and water.”

The ‘Chariots of Fire’ director said Ireland was in a position to reap the benefits that arise from digital technology. He said however, that more needed to be done in terms of encouraging educators and SMEs to engage more with ICT.

“Digital technology has fundamentally reshaped the world in which people of all ages make sense of, connect with and engage with society each other,” he said. “Although the pace and speed of change can be bewildering the need to up our game is absolute.”

Calling for a radical shake-up of the education sector that would encompass more ICT learning and “21st Century lecture halls”, he said that to settle for anything less would be to risk short-changing an entire generation.

“Having raided their pensions and depleted their environment and undermined their confidence in ever finding a worthwhile job, we can’t ever allow them to drift into becoming second-class citizens through our inability to invest in their future.”

Lord Puttnam said that while change was difficult, the task of politicians, educators and businesspeople was to do everything possible to offer opportunities for the next generation.

“We are and always have been change resistant. This is troubling because I believe the world is shifting on its axis and because of the impact of digital technology this is happening significantly faster than most people seem to be prepared to acknowledge,” he said.

Lord Puttnam was particularly scathing of Ireland’s political establishment, which he said needed to change. While praising individual party leaders he claimed that the present generation of politicians were trapped by the past.

“Irish politics has got to revolve beyond the Civil War. If I was a young person I would have no idea what the main parties stand for. Collectively someone just has to say enough is enough. We cannot allow centuries of old divisions to get in the way of finding solutions. All this will do is confuse young people and further alienate them.

“We need to get past the issue of false promises, of manufactured issues and tribal preferences, and instead move to an era of problem solving.”