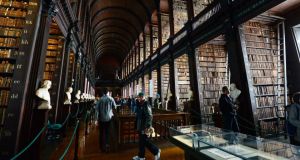 Tom Lenihan (21) son of the late Minister for Finance Brian Lenihan admitted to bringing a note into a third year law exam which took place a fortnight ago. In a statement, Mr Lenihan, a third year Business and Law student, said he took a note into his exam which was seen by an invigilator. He was brought before a disciplinary hearing for breach of the college examination rules and will have to repeat the exam.

A spokeswoman from Trinity College said they do not comment on individual cases but that they “support all students as far as is possible in continuing with their academic progress.”

In a statement to the Irish Times, the college said it “ follows robust academic and disciplinary procedures as set down in the College statutes in cases of infringement of regulations. It also has a robust set of procedures in place to provide pastoral support and ensure that all of our students are treated with dignity and respect.”

“In a disciplinary process, if there are mitigating circumstances, for example personal issues, the College will support all of its students, as far as possible, in continuing with their academic progress. The junior dean of the College deals with all student disciplinary procedures and adjudicates on each individual case, in consultation with the School and the students’ tutor.”

Any student that is allowed to sit a repeat exam at Trinity College has their mark capped at a bare pass of 40 per cent.

In a statement yesterday, Mr Lenihan said he regretted his actions and apologised to the college for his behaviour.

Mr Lenihan said he had been experiencing personal difficulties since being elected in February. “I have been diagnosed with depression and, unfortunately, I had neglected my medical treatment, which exacerbated my condition. I found myself unable to cope mentally and physically.”

The Graduate Students’ Union, the representative body for post graduate students of Trinity College said it is taking no position on Mr Lenihan’s tenability as president of Trinity College Student Union. Mr Lenihan has said he will take up the position of Student Union president when the new term begins, despite the controversy. They asked for members of the GSU and the wider community to “reflect carefully before commenting further on this matter particularly on social media, and to remind anyone concerned for their own or another’s mental health to contact the GSU vice president or the Student Counselling Service.”

Meanwhile a Facebook page called “Impeach Tom Lenihan” was set up calling for Mr Lenihan to step down. The page desciption reads “We believe that Tom Lenihan should not take office as TCDSU president in light of the recent revelations about his cheating in an exam. We would prefer that he stepped down, but we will pursue an impeachment referendum in the event that he does not.”