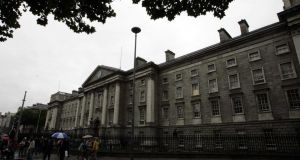 Tom Lenihan (21), son of late minister for finance Brian Lenhian, admitted bringing a note into a third year law exam at Trinity College Dublin which took place a fortnight ago.

The incoming president of Trinity College Student Union has admitted cheating during an exam.

Tom Lenihan (21), son of late minister for finance Brian Lenhian, admitted bringing a note into a third year law exam which took place a fortnight ago.

In a statement, Mr Lenihan said he took a note into his exam which was seen by an invigilator. He was brought before a disciplinary hearing for breach of the college examination rules and will have to repeat the exam.

Mr Lenihan said: “I greatly regret my action and I sincerely apologise to the students and to the college for my behaviour.

“I have apologised to the Junior Dean and I will fully comply with the sanction imposed on me.”

He said what he done was “wholly wrong and unacceptable” and “out of character”.

Mr Lenihan said he had been experiencing personal difficulties since being elected in February. “I have been diagnosed with depression and, unfortunately, I had neglected my medical treatment, which exacerbated my condition. I found myself unable to cope mentally and physically.”

On the morning of the exam, he added, he had had a panic attack and, “in a random irrational reaction”, took a note into the exam hall.

He added that he suffered several panic attacks throughout the exam period. “None of this is to excuse my behaviour, for which I take full responsibility, but it does provide context,” he said.

“Immediately after the incident, I told the current president of the Students’ Union and my fellow sabbatical officers what had happened. They have offered me their full support and confidence, for which I am deeply grateful.

“I will do all I can in the fulfilment of my role over the next year to reward their trust,” he said.

Mr Lenihan, a third year Business and Law student , said that despite being caught with the note, he would take up the position of student union president when the new term begins next month.

His student union election campaign had highlighted student mental health as a key issue and he has previously said he battled depression since his teens. He won over 2,000 votes, beating two opponents to become president.

The students’ union released a statement last night in response to the disciplinary proceedings enacted against Mr Lenihan.

“The union will continue to support Mr Lenihan in a pastoral capacity, as it does for all its members in all circumstances. The SU always seeks to advise and assist students encountering difficulty in college.

“We would advise all students to reflect before they comment on this case or indeed any case of a similar nature on the various social media platforms.

“As always, we would encourage any student with queries regarding mental health to seek support through the TCDSU welfare office and the student counselling service,” read the statement.