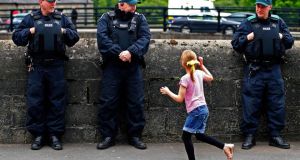 A girl waves towards police officers in Enniskillen, Co Fermanagh yesterday. A large security operation is in place around Enniskillen and Lough Erne ahead of the G8 summit, which begins today. Photograph: Yves Herman/Reuters

The escalating civil war in Syria is rising to the fore of the agenda for the G8 summit in Co Fermanagh as world leaders gather today at Lough Erne for two days of talks.

However, British prime minister David Cameron is likely to face embarrassing questions from other leaders following revelations by the Guardian last night that the British secret service spied on delegations at G20 meetings in London in 2009.

The summit, which will also focus on economic and taxation issues, is the biggest political gathering ever held in Ireland, with the leaders of the US, Britain, Russia, Germany, Canada, Japan, France and Italy all attending.

Taoiseach to attend
They will be joined by Taoiseach Enda Kenny, who will attend in Ireland’s capacity as holder of the EU’s rotating presidency.

The summit comes amid deepening global divisions over Syria as US president Barack Obama faces a stern pushback from Russian president Vladimir Putin to his move to arm the rebels fighting the Assad regime.

Mr Obama and British premier David Cameron, host of the summit, had hoped to persuade Mr Putin to row in behind western efforts to encourage a settlement in which Syrian leader Bashar al-Assad would relinquish power.

Although Mr Putin said he too wanted to broker peace in the country, he said the rebels were discredited and raised disturbing video footage of a rebel fighter apparently biting into the heart of a regime soldier.

“Is it them who you want to supply with weapons? Then this probably has little relation to humanitarian values that have been preached in Europe for hundreds of years,” Mr Putin said.

Mr Putin’s remarks drew a forceful response in Dublin from Canadian prime minister Stephen Harper, who held bilateral talks at Farmleigh with Mr Kenny. Mr Harper said there was no prospect of the other world powers reaching common position with Mr Putin.

“We in the West have a very different perspective on the situation. Mr Putin and his government are supporting the thugs of the Assad regime for their own reasons and I do not think it is justifiable and Mr Putin knows my view on that.”

Belfast engagement
The first big event today will be in Belfast, where Mr Obama will give a speech to schoolchildren shortly after he and his family arrive from Washington. He is expected to press for a renewal of the effort to bridge the community divide in the North.

First Lady Michelle Obama travels afterwards to Dublin for a series of engagements.

Mr Kenny’s spokesman said he will attend talks this afternoon between the European G8 members and Mr Obama at which they will discuss the new EU-US trade agreement.

This process took a step forward on Friday when European trade ministers meeting in Luxembourg under Ireland’s presidency settled a mandate for EU negotiators.

“That’s a significant agreement and it’s significant that it happened during the Irish presidency,” the Taoiseach’s spokesman said.

Tax issues
The leaders will address tax issues tomorrow, a discussion which comes against the backdrop of an international drive to clamp down on avoidance and evasion by big business.

While they are likely to take steps to compel offshore companies to reveal their beneficial ownership, the leaders are expected to stop short of measures which would force companies to declare publicly their revenues, profit and tax payments country by country.

Security has been stepped up considerably for the summit, with 3,600 police reinforcements from England, Scotland and Wales drafted in to help the PSNI.

PSNI chief constable Matt Baggott said he was quietly optimistic the Lough Erne event “could be the most successful G8 conference”. The force expects about 2,000 protesters in Enniskillen this evening.

Covid-19: The best and worst places to be in the world in the coronavirus era 13:15
Eddie Brennan steps down as Laois hurling manager 13:14
UK executives rush to sell shares over capital gains tax fears 13:00
Covid-19: UK leaders meet to discuss lifting restrictions for Christmas 12:57
Concern over high number of care staff failing to show for Covid-19 tests 12:43