First austerity, then suicide and finally, abortion. By the time the third question was through, all we were fit for was a panel of six psychiatrists and strong drink. 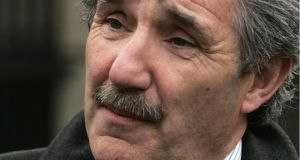 It was a beautiful day.

The sun – that prized rarity – shone down on Leinster House, lifting the spirits of smiling deputies as they bounced inside for the Tuesday sitting.

But those warming rays failed to penetrate the Dáil chamber.

It’s never a laugh a minute during Leaders’ Questions, when some of the most pressing issues facing the country are aired by our political leaders. But even by the Dáil’s normal standard of gloom, yesterday’s session was particularly grim.

By the time the third question was through, all we were fit for was a panel of six psychiatrists and strong drink.

But you can’t get hold of a psychiatrist for love nor money these days because they’re too busy taking lumps out of each other on the radio and television.

As for the drink, if you have one, the floodgates could open and then you’d be on the slippery slope and well on the way to the thin end of the wedge . . .

It was John Halligan of the Technical Group who returned to the question of abortion, specifically in relation to women who have become pregnant as a result of rape and women carrying a foetus diagnosed with a fatal foetal abnormality.

It had been some time since Enda’s last feelgood photocall. You could see the strain on his face.

Waterford’s John Halligan did not mince his words. His contribution was powerful. As he spoke, outlining what is the reality for too many pregnant women in this country, the atmosphere in the chamber changed.

What he had to say did not make for easy listening.

He commended the Taoiseach for his determination in bringing forward the Protection of Life During Pregnancy Bill.

It can’t have been easy.

However, he said the draft Bill provided “little reassurance” to those in the situations he outlined: “such pregnancies that have the potential to destroy the lives of those women who face them”.

Government backbenchers stayed silent as he pointed to recent court cases where men convicted of sexually assaulting women avoided jail by paying a sum of money to their victim. He contrasted this with women who, pregnant as a result of rape, might attempt to have an abortion in Ireland.

This course of action “carries the potential of 14 years in prison” for any woman who attempts it.

“Does the Taoiseach not think this is warped justice?” he asked.

“Instead of supporting women who become pregnant as a result of being violated, the Government proposes to penalise them.”

Halligan surveyed the benches across the floor and their grave-faced array of men. Not one female member of the parliamentary party was present.

“I defy any member to look a pregnant rape victim in the eye, or a woman carrying a baby that is certain to die, and tell her that we are more entitled than she is to control her body. We cannot continue to brush these cases under the carpet.”

And he asked the Taoiseach if he would support a constitutional referendum to allow for abortion in these circumstances.

In his reply, Enda stuck rigidly to the terms of the X case ruling. In bringing forward this legislation, his Government was constrained by the strict requirements of the Constitution and the Supreme Court decision. Nothing else.

He didn’t answer the question about a referendum.

So John, apologising more than once for being so blunt and stressing that he didn’t wish to be offensive, asked Enda if he had ever spoken to a woman who had been raped. Because he had.

“It is inhuman and deeply offensive to tell a woman who has been violated and raped that she must present herself as being suicidal before she can have an abortion in Ireland,” he said, to the strained silence opposite.

“If it were your daughter or mother or if it were my daughter, mother or granddaughter who was raped and violated and became pregnant as a result, would we expect her to present herself as being suicidal in order for her to have a termination of her pregnancy?”

It was powerful stuff.

“I ask everybody to reflect on this.”

Kenny said he had spoken to women who had abortions. He also recently spoke to women “raped inside marriage”.But these were arguments for another day. He had to do his duty as a legislator “and that is what we will do”.

And the backbenchers galloped away.

3:45 'I thought I was going to die': Ocasio-Cortez on the storming of US Capitol

No agreement reached on reopening special needs schools – Fórsa 09:08
EU states warn of risks to vaccination credibility as Pfizer slows supplies 07:46
Mary’s story: Roscommon woman believed a lifetime of exile was as it should be 06:00
Busy time ahead as players in Ireland face new contract discussions 06:00
AIB plans ‘ethical’ sale of up to 650 distressed mortgages 05:45