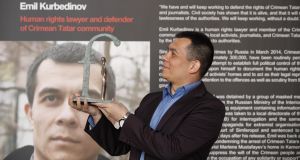 Crimean Tatar lawyer Emil Kurbedinov has been awarded the 2017 Front Line Defenders award for his work in defending human rights activists, political prisoners and journalists since the Russian occupation of Crimea three years ago.

Mr Kurbedinov, who travelled to Dublin this week to accept the award presented in Dublin’s City Hall, has also defended the persecuted Crimean Tatar minority and provides emergency response and documentation of rights violations during raids and searches of activists’ homes.

In January 2017, a district court found him guilty of “propagandising for extremist organisations” and sentenced him to 10 days in detention.

Many of the Crimean Tatars, who make up 12 per cent of the population of the Crimean peninsula, opposed the Russian occupation in 2014 and have been arrested and reportedly subjected to abuse.

“Since childhood I have known what it means to be persecuted by the regime,” Mr Kurbedinov said on Friday, explaining how Crimean Tatars returned to Crimea in the 1990s after they were expelled to central Asia by the Soviet Union in the 1940s.

“Since 2014 we are constantly facing religious persecution, persecution of civil activists, of journalists and of those who express any opinion that does not agree with Russia’s position.”

Mr Kurbedinov said he and his colleagues regularly face threats, interrogations and are often summonsed by the Federal Security Service.

“We cannot guess what the future brings, we do not know what is going to happen tomorrow, but we know one thing and it is that we have to fight for our rights peacefully and that today the human rights movement in Crimea is growing.”

He said the Front Line Defenders award would help raise international awareness of human rights abuses in Crimea and stop Crimea from falling off the news cycle.

“This award does not just give us protection but is also a reminder for the people whose rights are being violated that they have not been forgotten.”

Andrew Anderson, executive director of Front Line Defenders, congratulated the finalists for their efforts in peacefully demanding human rights in their countries.

“In his work as a human rights lawyer Emil takes up the most dangerous cases, including those of his fellow Crimean Tatars, who face systematic discrimination and persecution,” said Mr Anderson. “In a context where the rule of law has been corrupted and where abduction and worse are real possibilities, Emil’s commitment demonstrates exceptional courage and integrity.”

An estimated 281 human rights defenders were murdered in 25 countries last year, while hundreds more suffered harassment, were detained for their work and were subjected to smear campaigns, according to Front Line Defenders. Nearly 50 per cent of those killed were defending land, indigenous and environmental rights.