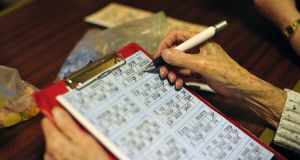 It has emerged that a north Dublin youth service has been running an unauthorised weekly bingo night for decades. File photograph: Aidan Crawley

Dublin city councillors are seeking an urgent audit of organisations using council property after it emerged a north Dublin youth service has been running an unauthorised weekly bingo night for decades.

St Monica’s Youth Resource Centre in Raheny has been operating on a council-owned site on Tonlegee Road for 30 years and has been running a bingo night on Wednesdays, attracting up to 500 players spending €10-€15 each.

Dublin City Council said it had not been aware of the bingo night and considered it a “serious contravention of the lease” on its site.

It has also emerged the youth centre does not hold a gambling licence to run the bingo night.

Susan Daly, whose parents set up the club, said the proceeds from the weekly bingo were essential to keep its services running.

“We have almost 500 people some nights, the average is 480. The bingo pays for the heat, the light, everything from the hand-towels up, we couldn’t survive without it.”

Ms Daly, who works as a community employment supervisor at the centre, said she was not aware the bingo night was prohibited under its 99-year lease from the council, for which it pays under €50 a year, until the youth centre went to court to seek a gambling licence last week.

“We did know we needed a licence, because bingo is gambling, and we used to have one but it had lapsed a few years ago. It was only when the judge said in court that the lease didn’t allow fundraising on the premises that we knew anything about that.”

The licensing application has been adjourned until November 1st. Dublin City Council said on Friday that bingo was not permitted in the youth centre.

“It is a condition of the lease that the premises can only be used as a youth club and for no other purpose.”

Until Friday the council had been “unaware of the holding of bingo nights in the premises. Dublin City Council considers this a serious contravention of the lease and will contact the lessee in this regard.”

More than 200 community groups and charities have leases or other letting arrangements on council-owned properties for which they pay nominal rents, some as low as €33 annually. The council receives just under €250,000 in annual rent on these properties which would, it said, have an open market value of around €10 million.

Solidarity councillor Michael O’Brien said it was “not evident” what services many of these organisations were providing for their low rents.

“I have no problem with low rents, if these facilities are being used in the manner that was intended. We need an audit to ascertain whether these leaseholders are honouring the terms of their leases.”

Chairman of the council’s finance committee, Independent councillor Ruairí McGinley said he would support an audit. “The purpose of more than half of the lessees is clear, but some, particularly older ones do warrant investigation.”