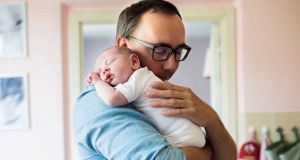 Minister for Employment and Social Protection Regina Doherty said Ireland’s social policy “is going to follow international norms of best practice – that parents get to stay at home with their children for the formative times in their lives”.

Shared parental leave is expected to be introduced within the lifetime of this Government, Minister for Employment and Social Protection Regina Doherty has pledged.

The Government wishes to increase the combined leave to 52 weeks, to be divided between parents, she added.

Ms Doherty said she and the Taoiseach would travel to Gothenburg in Sweden this Friday to “sign off and bring into play a European social pillar to try and extend parental leave that’s shared leave between the mammy and the daddy”.

She said it was “equally important for fathers to be at home with their children for their first 12 months”.

“We’re going to try and introduce that in the lifetime of this particular Government,” she told party members.

The Minister pointed to current paid maternity leave of 26 weeks and paternity leave of two weeks, and said the Government wants to increase this to 52 weeks, to be divided between parents.

Ms Doherty said Ireland’s social policy “is going to follow international norms of best practice – that parents get to stay at home with their children for the formative times in their lives”.

Paternity leave was introduced in September last year and Ms Doherty expected the figure to rise to 70 per cent, as the leave can be taken at any point in the first six months of a child’s life.

Fine Gael wants to support a “work-life balance” and the Minister said “there is a whole other world that doesn’t involve work”.

The Department of Social Protection pays out over €20 billion a year to nearly 2.5 million people, she said, a majority of them pensioners and carers.

The Minister said people go to work to earn a living or to have fulfilling careers. But there is “far more” to everyone’s life than just work, she said.

“We’re living longer, but we do have to mind our parents the same way they minded us when we were kids.

“It isn’t fair to penalise people if they have to stay off work to mind a sick mam or dad. That will be reflected in the social contract.”