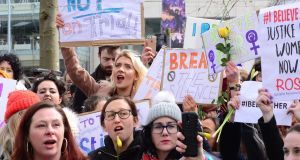 Protest rallies were carried out across Ireland on Thursday after the #IBelieveHer hashtag trended on Twitter in support of the woman at the centre of the Belfast rape trial. Photgraph: Pacemaker Press

Rape is an exceptional crime. Yet it continues, at most stages in our criminal justice system, to be treated like any other crime.

Despite the trauma, violation and degradation, and the devastating distress to its victims – arguably unparalleled in other crimes – most will not report it.

Sexual violence in endemic in Ireland, the vast majority of its victims women. According to the 2002 Sexual Abuse and Violence in Ireland report, 42 per cent of women had experienced some form of sexual violence but just 10 per cent reported it.

If, as a society, we are to better protect women from sexual assault and rape, we need them to come forward and report it, and to stick with the criminal justice system through the process. We must better support them to trust it will understand their particular trauma and minimise further harm to them.

Changes are needed throughout the system, specific to rape cases, from the moment a woman reports to gardaí, through investigation and evidence-gathering, to prosecution at court.

As Noeline Blackwell, chief executive of the Dublin Rape Crisis Centre, says, too often it is when a woman goes to the Garda Síochána that “her problems begin”. While some gardaí are “brilliant”, having been specifically trained in interviewing sexual assault and rape victims, others are “very poor”.

“A good garda will know, at first interview you won’t get all her evidence. She will be full of self-doubt, blaming herself, wondering how it could have happened to her. A poor Garda interviewer will ask, ‘How much did you drink?’, ‘What were you wearing?’ – asking how she brought it on herself.”

Forensic evidence from the woman’s body, if available, must be gathered at one of the six Sexual Assault Treatment Units. The Dublin unit, at the Rotunda Hospital, has been intermittently closed recently, due to staff shortages, meaning victims have to attend the Mullingar unit.

Already traumatised, they must travel two hours, not allowed to drink, go to the toilet or wash until they have been examined. Sufficient sexual assault forensic examiners must be recruited to ensure all assault units are fully functioning.

The length of time – between a rape being reported, evidence being gathered, sent to the Director of Public Prosecutions for a decision on whether to prosecute and a case going to trial – can be up to three years. This process must be expedited.

Blackwell hopes the newly enacted Victims of Crime Act, which requires that victims be kept informed of developments in their case, will change this.

In parallel, victims are entitled to support from a service such as one of the 16 rape crisis centres around the State. While the Dublin centre will see a recent rape victim within seven to 10 days, providing up to about seven counselling sessions, waiting times for longer-term counselling are eight to nine months.

The trial stage, for those who have stuck with the process this far, is perhaps the most traumatic. There has to be a way to improve this. Among the aspects the Dublin Rape Crisis Centre says must be examined is hostile cross-examination of the victim.

“The approach of defence counsel in rape cases [can be] robust to the point of ruthlessness,” it said in a submission last month to the Law Reform Commission. “Discrediting the victim involves deliberately maligning her behaviour, clothing and sexual character.”

An often-used defence argument is that the victim was promiscuous. The irrelevance of this to whether a woman has been coerced into sexual activity must be named. Another is that the accused had an “honest belief”, no matter how fanciful, that the victim consented to sex.

We know sexual violence is prevalent in Irish society. We know most victims – though by no means all – are women and girls.