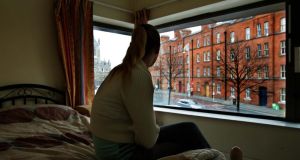 Focus Ireland says it is “really concerned” that up to 40 per cent of the young people leaving State care it is currently working with are homeless. Photograph: David Sleator/The Irish Times

An emergency response to the growing crisis of homelessness among young people leaving State care is required before a tragedy occurs, housing charity Focus Ireland has warned.

The charity says it is “really concerned” that up to 40 per cent of the young people leaving State care it is currently working with are homeless.

Describing them as “perhaps the most vulnerable section of the homeless population”, Neil Forsyth, services manager, said young people appeared to have been forgotten in the current furore about housing shortages.

He says while young people leave full State care at 18 they are considered to be in transitional care until the age of 21 or 23 if in full-time education. They should be assigned an after-care worker and supported transitional housing.

“Many of them are being forced to access homelessness services directly from care at the age of 18,” said Mr Forsyth.

“Of the 100 or so young people we are currently working with we would consider 38 of them to be in extremely insecure accommodation.

He said these young people were vulnerable to exploitation and to falling into inappropriate company. Many had mental health issues and their coping strategies were under-developed. “We are constantly worrying about these young people, about a tragedy happening. We hear all the time about suicidal thoughts, suicide attempts.

“A lot of them have emotional and psychological issues by virtue of the experiences they have already had, and then to have to deal with homelessness at the age of 18.”

A 2010 HSE report into the deaths of young people leaving care said “supported lodgings” should be available in all areas and that insecure or bed and breakfast/hostel accommodation should “not form any part of the care arrangements for any child in State care irrespective of their age or care status”.