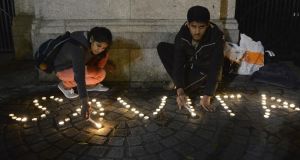 Anupama Challagundla (left) and Vankata Charumamilla at a candlelight vigil in remembrance of Savita Halappanavar that was held at the gates of St Stephen’s Green, Dublin, last night. Photograph: Dave Meehan

Up to 200 people attended a candlelight vigil in memory of Savita Halappanavar this evening.

The vigil organised by the Abortion Rights campaign, was held outside the gates of St Stephen’s Green in Dublin to mark the second year since Ms Halappanavar’s death.

Her name was spelled out in candles and those attending held candles in memory of Ms Halappanavar.

The crowd heard music and poems including What Kind Of Times Are These by Adrienne Rich.

“We just wanted to come together in respect and in remembrance of Savita,” said Cathy Doherty, spokeswoman for the Abortion Rights campaign.

“I really don’t know how far we have come in the two years that have passed since Savita’s death, but certainly public conversations around abortion are happening more and the stigma is being lifted,” she said.

Ms Doherty said that while she would welcome any legislation that would save a woman’s life, the existing law “makes things more complicated and dangerous”.

“It puts women in an awful position depending on whether they can afford to travel to the UK and pay for an abortion or not,” she added.

Ms Doherty said women who cannot afford an abortion in the UK “are compelled to break the law and induce their own abortions”.

“Hopefully the Government will repeal the eighth amendment and protect women in Ireland and treat us like the valuable human beings that we are,” she said.

Ms Halappanavar died at Galway University Hospital on October 28th, 2012, having presented a week earlier with back pain. She was 17 weeks pregnant and was miscarrying. She asked several times for the pregnancy to be terminated. This was refused, however, as the foetal heartbeat was present.

Ms Halappanavar went on to deliver a female foetus, was transferred to the hospital’s high-dependency unit and then to intensive care, where she died of septic shock.

Her death sparked public debate which eventually forced a change in abortion legislation; the Protection of Life During Pregnancy Act 2013.