Middle classes must be convinced afflicted children worth investing in, forum hears 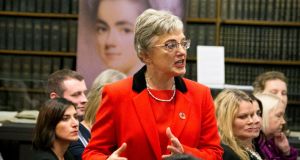 Minister for Children Katherine Zappone: “One in every 10 children lives in consistent poverty – experiencing both income poverty and deprivation.” Photograph: Colm Mahady/Fennell Photography

Child poverty was the “crisis of our times” and the Taoiseach should lead a drive to end it, a high-level conference on the issue heard on Friday.

It heard key steps would include convincing the middle classes that child poverty existed and then that these children were worth investing in, even if they were in marginalised and often-stigmatised families, including those headed by lone parents, Travellers, Roma or those with mental health or addiction issues.

The workshop was convened by Minister for Children Katherine Zappone, and looked at UN sustainable development goals (SDGs) as they relate to children. It was attended by senior officials from the Department of the Taoiseach, the Economic and Social Research Institute, civil society and academia.

Keynote speaker, Prof Jeffrey Sachs, special adviser to the UN secretary general on SDGs, said failure to invest in children “dooms them for life”. Choices had to be made about resourcing investment.

The science on the impact of poverty on children was “absolutely clear”, said Prof Sachs.

“If you don’t invest in the children you doom them for life. Brains are really fragile instruments. They are not robust. When the child grows up in an environment of stress and their cortizol system is triggering all the time – that rewires the brain.

“We know the consequences of that are devastating, for physical health and cognitive development, for a lifetime . . . Children are fragile. Let their brains develop . . . Don’t overwhelm these little things in their first years and then expect them to perform as good citizens for the rest of their lives.”

“It’s a choice,” he said, as to how resources were distributed in a market economy .

“A market system produces wealth but it does not produce social justice . . . The basic problem of the market economy is that it is based on unleashing greed and the desire for wealth. It has to be tempered by the demands of morality, ethics.”

Tanya Ward, chief executive of the Children’s Rights Alliance, described child poverty as “the crisis of our times” while Prof Sachs, describing it as “multiple crises”.

Ms Zappone said the statistics on child poverty were “stark”.

“These figures are hard to ignore. Indeed to do so is to fail in our moral and ethical duties to these children and their futures,” she said.

She called for a cross-departmental approach to the issue, a call that was echoed with many saying it should be led by the Taoiseach.