Up to 12 additional direct provision centres to open 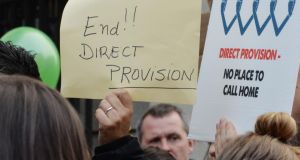 Critics of direct provision will be disappointed at plans to expand the system. Photograph: Alan Betson

As many as 12 new direct provision centres are to be opened to accommodate asylum seekers, The Irish Times has learned.

One centre in Co Longford, which had operated as a direct provision centre between 2001 and 2011, but had been more recently operated as a guest house, has been “re-engaged for the accommodation of asylum seekers”, according to the Department of Justice.

Richmond Court in Longford town is beginning to receive new asylum seekers, bringing the number of direct provision centres in the State now to 36.

Direct provision has been criticised by a range of human rights organisations, particularly because people typically spend several years in it as their asylum applications are processed.

In advertisements, the RIA says: “Arising from the recent significant increase in asylum applications the RIA intends to draw up, from the expressions of interest, a list of potential service providers with whom it may be in contact if/when the need for such service provision arises”.

It says the RIA needs premises including hotels, hostels, guesthouses “which can accommodate upwards of 50 persons and which should be reasonably close to all services, eg shops, schools, transport etc”. The latest date for expressions of interest is August 21st, 2015.

Sources say up to a dozen new centres are anticipated in coming months. A spokesman for the department said it was “too early to say” how many would be needed.

The State is preparing to accept up to 1,100 refugees over the next two years, mainly from Syria and Eritrea, to meet its commitment to participate in EU measures to address the Mediterranean migrant crisis.

In addition, the number of individuals arriving at ports and airports seeking refuge is increasing. In the six months to the end of June some 1,481 asylum applications were received, compared with about 700 in the same period last year.

However, news of moves to expand the direct provision system will be a disappointment to many, coming as it does little more than a month after a much-anticipated report on reform of the system.

An interdepartmental committee is to be established on how much, if any, of the 388-page report from the Working Group to Report to Government on Improvements to the Protection Process, including Direct Provision and Supports to Asylum Seekers, will be implemented.