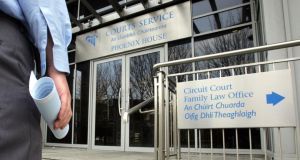 The Children Living with Domestic and Sexual Violence (CLwDSV) coalition details its concerns in a submission made this week to the Family Justice Oversight group in the Department of Justice.

In a hard-hitting report, the group, which includes Barnardos, Safe Ireland, Women’s Aid, the ISPCC and the Daughters of Charity, says abusive parents are routinely granted unsupervised access to children; mothers’ concerns about child abuse are minimised; and custody arrangements which “escalate” domestic violence are ordered by the courts.

The Children Living with Domestic and Sexual Violence (CLwDSV) coalition details its concerns in a submission made this week to the Family Justice Oversight group in the Department of Justice. The oversight group was appointed by the Minister for Justice, Helen McEntee, in September to drive reform of the family justice system.

Clíona Sadlier, chief executive of Rape Crisis Network Ireland, said the coalition had been “tracking what is happening in the family courts to women and children experiencing domestic violence, and how they are being failed” for a number of years. “This report is the result of a lot of work, joining the dots, to work out just what is going on. It is challenging.”

A family experiencing domestic abuse could be “simultaneously involved in proceedings in the criminal court, the family court and in the child protection system” which frequently “work in opposite directions”, says the report.

Where Tusla may require a mother to leave an abusive partner to protect her children, in family law proceedings the parental rights of the abusive partner may supersede the child’s right to safety, often resulting in “unsupervised access [being granted] to the abusive partner”. The abused mother may be ordered to co-operate with this, conflicting with the conditions being put on her by Tusla.

Mothers’ reported concerns about child abuse can be “notoriously difficult” to prove. If not upheld in criminal proceedings, the concerns can be presented as “malicious” in family law proceedings, and turned against the mother.

And even when there is a conviction for violent abuse of the mother it “may be deemed irrelevant” in a custody or access case because the offence was not against the child. “This fails to recognise the damaging emotional impact on the child” of witnessing or hearing their mother being abused, says the coalition.

“Studies show that adult partners who are abusive are also at increased risk of abusing their children,” it adds.

“The result of these problematic and contradictory interactions is that the risks posed by the perpetrator to the children and the non-abusive parent are minimised, and unsafe child custody and access arrangements are made that continue, and possibly escalate, the abuse of both.

“Research in this area is urgently needed to understand these dynamics and patterns.”

Serious concerns about the “quality and experience” of court-appointed child welfare assessors are raised. These experts provide reports to the court under sections 32 and 47 of the 1995 Family Law Act, on the children’s best interests. They are, however, not regulated and no central database of assessors is kept by the courts services.

“In our experience,” says the coalition, “many lack the necessary understanding of domestic and sexual violence, its impact on children and how the abuser can manipulate or intimidate children into expressing views and choices that are to the advantage of the abuser and not in the best interest of the child.”

Mediation should never be mandated, it says, in cases involving domestic abuse. Mediation is ineffective, it says, “where one party is intimidated and threatened by the other”.