Travellers in Casey storm ‘not surprised’ by surge in support 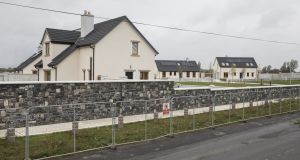 The site of the new Traveller development at Cabragh Bridge in Thurles, Co Tipperary.

The extended Traveller family at the centre of a racism storm involving former presidential candidate Peter Casey has said it is not surprised by the level of support he received and expressed fears that others may follow his example.

Businessman Peter Casey surged ahead of all the other challengers in the election campaign following his criticisms of Travellers and their separate ethnic status. He finished in second place with 23.25 per cent of the vote.

He called the family “selfish” and alleged they refused to take up six new houses worth €1.7 million at Cabragh Bridge outside Thurles, Co Tipperary, because there were no stables or paddocks for their horse.

In a statement on Twitter issued through Traveller activist Eileen ní Fhloinn, the family at the centre of the controversy reiterated their earlier rebuttal of those claims, and insisted they “never asked” for houses, stables, or paddocks.

“Different elements of the media are now asking us for our opinion about what seems to a big support for Peter Casey in the presidential election,” they said.

“Our family has already gone through hell because of the hatred directed against us in all of this. And we have had to learn very quickly that the media were happy to play a very big part in it all.”

The families also addressed the surge in support for Mr Casey in the election. “Are we surprised at the big amount of support for Casey? No. We are not. Casey was able to pick the worst off people in Irish society and set them up against each other.

“When you can get the settled people to put the blame on the Travellers for everything, then nobody needs to question who is really responsible for the terrible conditions the Government has people living in.

“A lot of settled people saw through these lies, and we would like to thank them for their support in our dignified protest when Mr Casey decided to ‘visit’ us.

“Casey probably now feels he has got somewhere through using us and all the Traveller community in a hate campaign. So we know he will keep going, and there will be probably a lot more Caseys coming out when they see this works.

“We have learned a lot from this very big ordeal we were put through. We are asking the media now learn from it as well. Please check out the facts before you use people in this way – no matter how popular it might be to run down Travellers.”