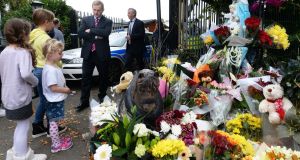 A parish priest has criticised statutory agencies for failing to act on a report drawn up over four years ago, which highlighted appalling living conditions for children at a Limerick city halting site.

The report was commissioned in 2011 after repeated approaches to Fr Pat Hogan of the Holy Family Parish in Southill from mothers living at Clonlong halting site. Some 30 per cent of children on the site were being treated for asthma.

Having visited the halting site in the winters of 2009 and 2010, Fr Hogan said he witnessed at first hand the implications for people living in holiday caravans in extreme cold.

These included frozen water and gas pipes; frozen washing machines; children out of school for six weeks as their uniforms could not be washed; children and adults sleeping in the same bed to keep warm; up to five heaters operating at full strength with minimal impact.

The authors of the report, compiled over three weeks in August 2011 were two retired social workers, who visited 10 families comprising 19 adults and 34 children.

A nine-month-old child was described as suffering from vomiting and diarrhoea as a side-effect of antibiotics. One six-year-old boy, with cystic fibrosis and advanced liver failure, needed 24-hour care. His family, whose caravan was described as grossly overcrowded, had been on the housing waiting list for 11 years. They have since been rehoused.

Some 10 children out of 34 had been, or were being, treated for asthma. The average among school children in Ireland is estimated at between 15 per cent and 21 per cent.

The report was sent to statutory agencies including Limerick City and County Council, Barnardos. The then Ombudsman for Children Emily Logan  visited the site to meet one family who had contacted her office in relation to their child. * However, apart from the rehousing of one family nothing has changed according to Fr Hogan.

“Nothing has changed really and, in light of what has happened in Carrickmines in Dublin, we need to focus on the standard of Traveller accommodation. We are looking at the conditions in Clonlong on a daily basis and there’s a lot of sick children there.

“A lot of the families are even bigger now with more children and you ask yourself, how can you live in these conditions.”

About 20 families are living on the site at the moment; three in permanent dwellings and the rest in mobile homes.

Fr Hogan is aware that the issue of housing is complex. “I’m not stupid: I realise there are severe problems . . . But unless you solve the housing for Traveller families there’s no regeneration because you can’t have 20 or 30 families living in such conditions and expect no antisocial behaviour and no crime.”