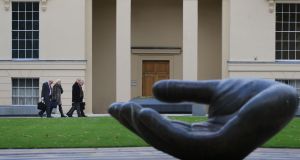 The Department of Education: the report on young Travellers from birth to age 24 is the fourth in a series drawing on data from the CSO, the Department, the All Ireland Traveller Health Survey and Pobal. Photograph Nick Bradshaw

Traveller babies are three times more likely to die in their first year than infants in the settled population, while later in childhood they are twice as likely to have a disability, according to a new report.

Meanwhile, Traveller teenagers and young adults are significantly more likely to smoke, drink alcohol or use cannabis, the stark findings of a Department of Children report published on Tuesday makes clear.

The report on young Travellers from birth to age 24 is the fourth in a series drawing on data from the Central Statistics Office, the Department of Education and Skills, the All Ireland Traveller Health Survey and Pobal.

In 2016, there were more than 18,000 young Travellers in Ireland, accounting for 1.15 per cent of the total population aged from birth to 24 years old. However, they accounted for almost half the total Traveller population of about 40,000.

Co Galway had the highest number of young Travellers with 1,541, followed closely by South Dublin, with 1,347. Co Leitrim had the fewest young Travellers, with just 121.

Infant mortality among Travellers fell from 18.1 per 1,000 infant Travellers in 1987 to 14.1 per 1,000 births in 2008, though this figure is now nearly four times higher than that experienced by the settled population.

“While positive progress has been made overall in relation to infant mortality rates in Ireland, it is evident that there still exists a notable disparity between Travellers and the general population,” says the report.

The two most common disabilities among Traveller children and young adults, says the report, were “difficulty in learning, remembering or concentrating”, followed by “other disabilities, including chronic illness”.

The prevalence of other disabilities increased between 2011 and 2016, including intellectual disability, psychological or emotional condition, and “difficulty in dressing, bathing or getting around inside the home”.

Traveller children of this age group were likely to have been drunk at least once in the past 30 days, with 16.8 per cent saying they had been compared to 10 per cent among the settled population.

Meanwhile, more than 18 per cent of Traveller children reported having taken cannabis at least once in their lifetime, compared with 8.7 per cent of other children.

More positively, however, education among Traveller children improved between 2011 and 2016, with a fall in the numbers of those aged under 24 who had gone only to primary school.

Meanwhile, the number with a secondary education increased, while the number finishing upper secondary school years rose 13 per cent to 20 per cent in those years.